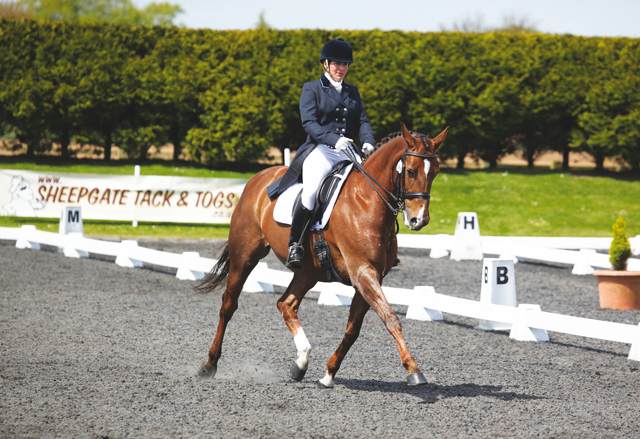 SHEEPGATE MAKES IT A SHOW TO REMEMBER
The annual Sheepgate Tack & Togs Dressage Championships recently crowned many champions but this was a show with a difference.
Little did anyone realise that a casual chat with Claire Llewelyn over dinner one evening would result in the most amazing prizes being awarded in memory of her late husband, Justin Llewelyn. Justin was the UK roving Ambassador for Taittinger Champagne and was the Stewards General of the FEI in the UK. He worked in the media zone of the last three Olympic Games in the equestrian events.

Sheepgate Equestrian was one of the last venues Justin attended with his wife Claire, who was competing, so this seemed a fitting tribute by Llewelyn family. Each Championship offered a bottle of Taittinger Champagne to the winner and two prizes that were to be drawn out of a hat by each winner and second place, which made the tribute very special.

Dawn Faulkner Smith, from Alford, made a winning return to the competition arena having been out of competing for eighteen months following knee surgery. This talented twelve-year-old gelding has been owned by Dawn for the last four years and they have enjoyed many successes. Clearly delighted with their win in the Sheepgate Tack & Togs Novice Championship, Dawn won a special prize of wine and dinner at the Ledbury Restaurant in London.

TEAM SHEEPGATE IMPRESS THE JUDGES
Sheepgate’s Sarah Payne was making her Intermediaire 1 debut with the talented chestnut mare, Longdean Rising Star having had the competitive ride on her since December 2013. Owned by Jo Weekes, this lovely mare has been under Sarah’s guidance with Jo for the last year but after a suggestion by Jo that maybe Sarah would like to compete her, this was an opportunity not to be missed. Sarah has a particularly good relationship with the mare, whom Jo describes as “too clever for her own good!” The combined scores over the two days gave a win for the pair in each section and the overall title of the Sheepgate Tack & Togs Advanced Championship. The additional prize of a meal for two at Anton Mosimann’s restaurant in London was a real bonus.

Jess Parr from Market Rasen, riding her own British bred Freddie whom she has trained through the levels with help from Sarah Payne at Sheepgate for the last two years, secured two placings at Medium and Advanced Medium.

Local judge Alice Elliott and her own Chatsworth Chieftain, who was bred by the Duchess of Devonshire and has been owned by Alice for two years, secured two good placings in the Novice and Elementary Sheepgate Tack & Togs Championships.

Alastair Gibbs, riding Rachael Grundy’s Wilfret, was delighted with a third and fourth place in good company. Another local judge, Laura Leicester had placings at Prelim and Novice, closely followed by Rachael Grundy riding her own young horse, Chelano.

The show concluded with the very fitting final tribute to Justin Llewelyn: a fly past of the Lancaster. Full results and further details can be seen at www.sheepgate.co.uk