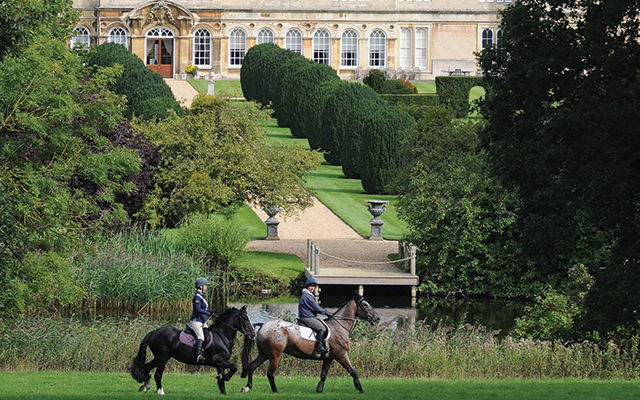 The SEIB Burghley Sponsored Ride 2016, which will take place on 4th September, on the final day of the world famous Land Rover Burghley Horse Trials, will donate proceeds to three worthy equine charities.
The equine charities that will benefit from the SEIB Burghley Sponsored ride are: World Horse Welfare, the Ebony Horse Club and the British Horse Society.

Ride organiser, Ian Scott said: “We are delighted to be donating money to such deserving equine charities. Last year’s ride raised over £20,000, that meant that since the ride started in 1996 we have raised a cumulative total of over £200,000.”

Because of the generous sponsorship from SEIB Insurance Brokers, 100% of the money raised by participants in the SEIB Burghley Sponsored Ride will go to charity. There will be prizes presented to the riders gaining the most sponsorship.

SEIB Insurance Brokers marketing manager, Nicolina MacKenzie said: “This is a wonderful opportunity to raise money for charity whilst enjoying breathtaking views over the magnificent Burghley House and cross country course. It is important to us that 100% of the money raised by participants goes to charity.”

SEIB offers competitively priced insurance cover for a multitude of equestrian possessions and pursuits and the company has a longheld ethos of putting something back into equestrian sport.

Roly Owers, chief executive of World Horse Welfare said: “The SEIB Burghley Sponsored Ride is a wonderful opportunity for riders, including our own re-homers, to get up close and personal with this world-renowned course on the final day of competition. We are hugely grateful to the Burghley Sponsored Ride for supporting World Horse Welfare again this year.”

Ebony Horse Club is a charity based in Brixton, South London, that provides horse riding opportunities to young people growing up in one of the most disadvantaged areas in the UK. Sue Collins, Chair of Trustees said: “It is our 21st anniversary next year. We used to take the children by minibus to riding schools but six years ago we got our own horses. We still take the children on excursions as we believe it is important for them to see more of the equestrian world. It will be inspiring for the children to see that they are a part of a community of horse lovers and to ride around Burghley would be an enormous adventure for them. To ride alongside others and to feel a part of that community is far beyond their general experience.”

The British Horse Society (BHS) are also grateful to be receiving funds from the ride to contribute towards the vital work that the charity does to help horses and those who look after them. BHS marketing manager, Beth Greener said: “Our thanks goes to Ian Scott for organising the ride and SEIB for their generous ride sponsorship which ensures that every penny raised from the ride goes to charity.”

Run over a 12km course, the SEIB Insurance Brokers Sponsored Ride allows participants to get up close to the daunting Burghley Cross Country fences including the legendary Dairy Mound and Trout Hatchery. Riders will also enjoy views over the magnificent Burghley House and have the chance to explore the tracks and pathways of the vast Burghley Estate.

Entries are open and a schedule and entry form can be downloaded from the website, which includes options to enter and pay online, at www.icommentate.co.uk/burghley or email burghleysponsoredride@btconnect.com for details on entering by post. Entries will close on Friday 26th August.