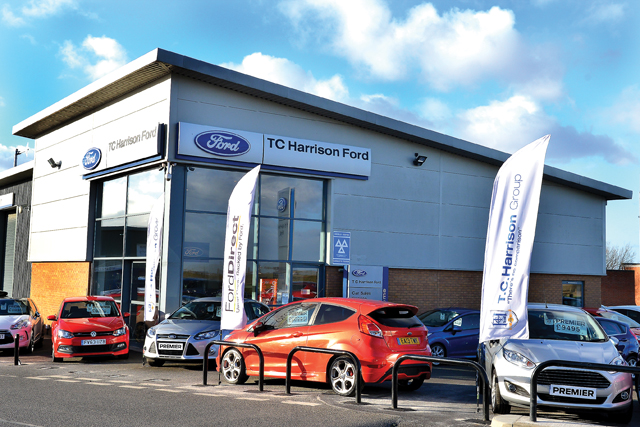 T C Harrison Ford has every reason to celebrate its first year of trading in Spalding. Since it acquired the Rylatt Ford dealership in Elsoms Way in January 2015, it has expanded once already and is about to expand even more.
Sales and site manager Alan Holman said: “It has been a lot busier than we thought and it is very pleasing for us that we are attracting customers from a larger area than we anticipated.

“It is the seventh T C Harrison Ford garage in the network and since we have been here the site has been redeveloped and we have recruited some extra staff to cope with demand. The workshop will also be expanded in the near future.”

Service manager Dale Hunt, who looks after the parts and service departments, says he has a good team around him. “We have manufacturer trained technicians and the Ford network to back us up as well. We offer servicing, repairs, MOTs and will take on any work as required. We are looking to get established in the Spalding area and welcome any make of vehicle. That is an area of the business we are looking to expand.”

Since 1931 the T C Harrison Group has grown into one of the country’s largest privately-owned motor groups, dealing in Ford cars and commercial vehicles and all makes of used cars, as well as providing extensive parts, accident repairs and servicing in its state-of-the-art service centres.

It has around 500 employees in sixteen locations, producing an annual turnover of around £200 million and serving more than 200,000 customers.

Thomas ‘Cuth’ Harrison is behind the company’s success. His philosophy was to look after customers so well they never needed or wanted to shop elsewhere for their vehicles.

Following his death in 1981, his fundamental principle was upheld not only by the succeeding chairman – Cuth’s eldest son Edward – but also by John his younger son.