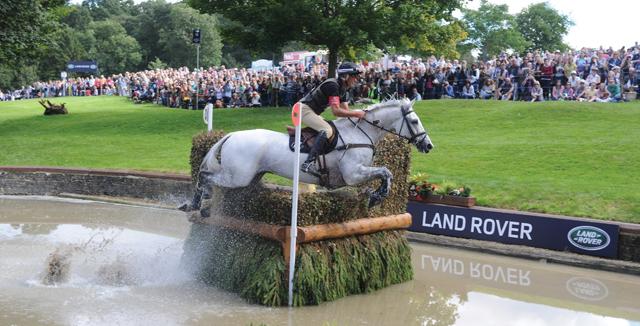 Catherine Austen speaks to Andrew Nicholson, who has won the last two runnings of the Land Rover Burghley Horse Trials on Avebury, and who is aiming for a record third title this year.
All eyes will be on Andrew Nicholson at this year’s Land Rover Burghley Horse Trials (4th–7th September). The New Zealand event rider is aiming to become the first to win the competition – one of the most prestigious in the equestrian world – three times on the same horse.

When Nicholson took the title in 2012 on Mark and Rosemary Barlow’s Avebury, it was the fourth time he had carried off the Burghley trophy. But it had been twelve years since his last victory – on the big chestnut, Mr Smiffy in 2000. It is every eventer’s dream to win a competition of Burghley’s calibre – and victories come along rarely.

What he didn’t know was that his 2012 Burghley win was to kick-start the most successful twelve months of his career. In the following year he was to win three events at the very top level: Pau, in southern France, the American four-star in Kentucky and Luhmuhlen in Germany. He also picked up five more at three-star level and in September 2013 he won Burghley once more on Avebury.

“It’s a feat of which I’m very proud and one which we might not see anyone else manage for a while,” says Nicholson in his new book about his life and career, Focused, which is launched at Burghley 2014. “It was achieved with a lovely team of horses; the nicest I have ridden.”

The story of Nicholson’s career is one of the most inspiring in sport. Brought up on a farm in New Zealand along with five brothers and sisters, there was no money to spare on luxuries. Like many farm children, they raced around on hairy ponies, but it wasn’t until Nicholson saw a film about the 1978 eventing world championships – the first to which New Zealand ever sent a team – in his local village hall as a teenager that he thought of trying to make a living out of competing horses.

With the naivety of youth, he grabbed a chance to come to the UK and work with horses at the age of eighteen. That was in 1980, and four years later he represented New Zealand at the Los Angeles Olympics.

Many successful eventers have been lucky enough to have substantial financial backing, either from family or generous sponsors. Nicholson has had to do it the hard way – by riding any horse sent his way, no matter how untalented or unsuitable and by selling the talented ones to fund his career (and his family’s living expenses). He has grafted his way to the very top of the ladder through sheer hard work – although if he had not had a prodigious natural talent in the first place and a gritty determination to succeed, hard work would not have been enough. Land Rover Burghley is one of his favourite events.

“Probably because I have done very well there!” he says with a laugh. “But beyond that, Burghley always has a great feel to it. Down at the stables, there is always a very relaxed atmosphere for what is a top event. People always seem to be enjoying themselves. It feels less pressurised and intense than Badminton, even though it is just as important a competition. The organisers try to make sure everyone – riders, owners, spectators, officials – is as happy as they can be. It feels like that in the tradestand area as well.”

Nicholson first rode at Burghley in 1983. It wasn’t a great success – he fell on the steeplechase phase (no longer part of the competition).

“I landed on my head, which put me off going back to Burghley for a while!” he jokes.

His first landmark success at the event came ten years later, in 1993. He finished third on a horse called Spinning Rhombus – owned by the same people who now own 2012 and 2013 winner Avebury, Mark and Rosemary Barlow. It wasn’t a win, but it felt like it. Nicholson and Spinning Rhombus had infamously lost New Zealand the team gold medal at the 1992 Barcelona Olympics the year before by knocking down nine showjumps. Burghley was their redemption – they proved they could showjump clear, much to the appreciation of the crowd, many of whom knew how humiliating the Barcelona ‘cricket score’ had been to Nicholson and the Barlows.

Victory came in 1995, on Buckley Province.

“He wasn’t a brave horse, but he was foot-perfect all the way at Burghley to give me my first four-star win,” says Nicholson.

In 2000, he steered Mr Smiffy – who had passed through the hands of several other riders who had found him too strong and wayward – to a second win. They survived an incident at an early fence on the cross-country course which gave rise to Nicholson’s nickname in the sport of ‘Mr Stickability’:

“It was as much my fault as his,” says Nicholson in Focused. “Normally he’d tow you into a fence and you’d sit quietly. But he didn’t this time and we found ourselves far too far off the fence, whereupon he put in an extra stride there wasn’t really room for. He did well to stay on his feet but went up vertically with his head between his feet. I was catapulted out of the saddle with my arms round his throat and my feet pointing towards the sky, but somehow ended up back in in the saddle.”

Nicholson is known above all for his genius as a cross-country rider, and in 2013 he became the first person to ride three horses round Burghley in a day – a task that would have daunted and exhausted almost any other rider. They all jumped clear round course-designer Captain Mark Phillips’s long, demanding track, and eventually finished first (Avebury), second (Nereo) and seventh (Calico Joe). It was a phenomenal achievement.

Now he is gunning for the treble. Avebury, the cheeky grey he bred himself, is the perfect Burghley horse.

“He has a very easy, economical way of galloping and it is easy to see a stride [to a fence] out of his gallop,” says Nicholson. “He handles Burghley’s undulating ground well, and because he is nimble and can turn and focus very quickly, Burghley suits him down to the ground.”

But he does not underestimate the challenge Burghley poses.

“It is the strongest four-star event there is, because the terrain is so varied and so demanding for horses,” he says. “I felt Mark Phillips did a very good job with the track last year and was very clever with his use of the ground. Burghley is a very tough one to win, but we will be doing our best.”

Focused: My Life in Pictures is the story of Andrew Nicholson’s life in horses. With an introduction by Land Rover Burghley’s course-designer Captain Mark Phillips, it starts with his childhood in New Zealand, and traces his career from his first competitions through five Olympic Games and victories at almost every major event in the world. He discusses his views on the sport of eventing, and details the secrets of his success as a horseman. There are never-before-seen pictures of his family and of him working with his horses at home, as well as of the high – and low – points of his career.

Focused: My Life in Pictures is published by Racing Post Books, and costs £20. It is on sale at Burghley, and is available from all good bookshops or www.racingpost.com/shop or tel: 01933 304858.