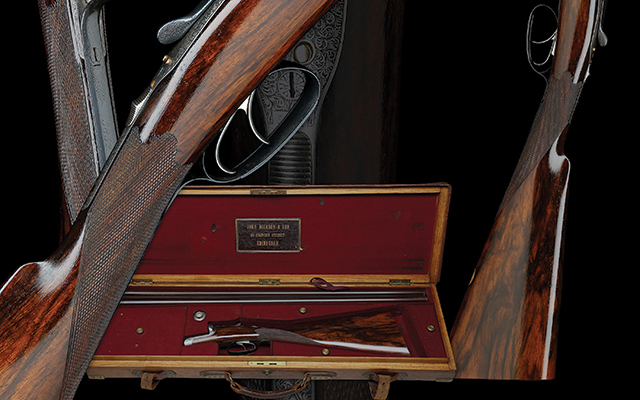 Auctioneers of fine modern and antique guns are now the largest Sporting Auction House in Europe, specialising in sporting items and militaria.
John Dickson (1794–1880) was the son of a porter. He became apprenticed to Wallace and then Innes before setting up on his own in Princes St, Edinburgh.

Essentially he became the Purdey of Scotland. Dickson produced an Over and Under, basically a side by side tilted over with a side lever. We have seen some of these. He even produced three barrelled guns in-line and one over two in shape.

Lot 1441 is a very rare Skeletal example – note the underside to see that wide base plate.

Bearing in mind this gun was made in 1883 with Best Damascus Barrels, it has automatic safety, double triggers and double rolled edge trigger guard. Note the fences engraved “John Dickson Patent”.

Thirteen of these guns were made according to the records, intriguingly this must be the fourteenth.

1883 was just pre invention of ejectors in 1885. Does that matter as we all have to pick up our cartridges anyway.

So it is a non-ejector of amazing rarity and beauty in very good condition by a famous maker in its original case, one of 14. Holts thought £3–5,000 as a non-ejector. Even I left a bid slightly in excess of that because of its beauty. Sadly an American took it home with him for £16,900.