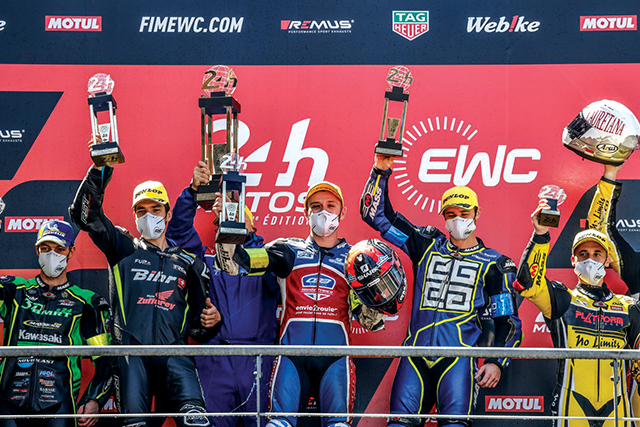 In an amazing performance, the National Motos team took victory in the Superstock class and 5th overall on their CBR1000RR-R Fireblade SP, having started the race from 18th on the grid. After some shifting positions at the front of the category during the first half of the race, National Motos took the lead at the halfway point of the race on the #55 CBR1000RR-R. At night, Kevin Trueb had a problem with his right hand, and the team manager decided to keep him as a reserve rider and race with only two riders, Stéphane Egea and Guillaume Antiga, making their feat of endurance even more impressive.

Last year’s winners F.C.C. TSR Honda France finished the 44th edition of the 24 Heures Motos in ninth aboard their #5 Honda CBR1000RR-R Fireblade SP, having been in podium contention until the early hours of the morning.

After the first three hours, the team of Josh Hook, Mike Di Meglio, and Yuki Takahashi was placed in a podium position, sitting in third.

By the mid-point of the race they had completed 424 laps and moved into second place, and as the hours passed, the Honda team kept putting in consistent and solid laps.

Entering the final quarter of the race, F.C.C. TSR Honda France was still running in second place, but with just six hours to go, an issue forced the team to lose time in the pit box. The crew worked hard to get the team back out on track, albeit in sixth place.

Towards the end of the race, Josh had a crash whilst on cold tires and was forced to enter the pit again where the mechanics did a world-class job in repairing the CBR1000RR-R Fireblade SP.
Demonstrating true endurance spirit, fighting until the end, Yuki crossed the finish line in 10th.

Honda privateer team RAC 41 Chromeburner had to retire in the early stages of the race due to a crash involving three riders at the Dunlop turn after just 14 laps.

#55 Stéphane Haddadj, National Motos Team Manager
“We did a great race to finish it with only two riders, and it was very difficult to manage it. So, with the perseverance, professionalism and physical conditions of the rider, we got a fantastic result. The bike was extraordinary, and we hope that this result helps promote this bike that is born for the competition.”