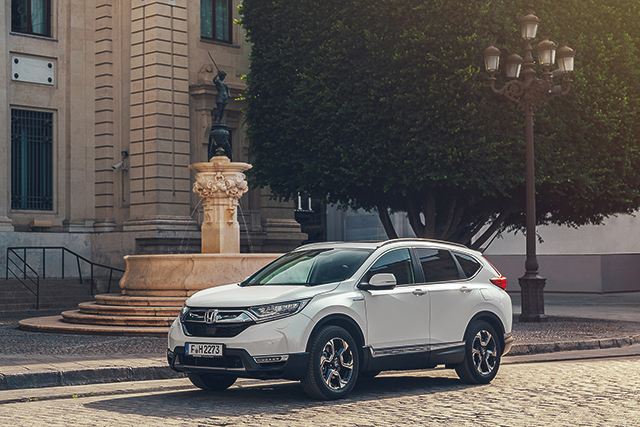 The Honda CR-V first appeared on our shores in 1995. It reigns as the world’s best-selling SUV. However, even Honda say this latest development is one of their biggest steps ever in the model’s history; Honda has dumped diesel engines and replaced them with a petrol hybrid which will be sold alongside the other CR-V models, all of which are powered by a 1.5 litre petrol i-VTEC engine.

The hybrid system combines two electric motors, a battery and a 143bhp 2.0-litre i-VTEC petrol engine. It gives the CR-V Hybrid lively performance with 0-60 mph taking under 9 seconds for the front wheel drive model, and just over 9 seconds for the AWD. Top speed is 112mph.
But when it comes to economy, you can understand why Honda has ditched diesel. Not only does the Honda CR-V Hybrid have low emissions, it has low fuel consumption too in the region of 53mpg. It’s also impressive to note that the CR-V Hybrid is only £800 more than its ‘standard’ petrol stablemates of similar trim.

The electronic gadgetry continually switches the CR-V Hybrid between running purely on electric battery power, and a combination of battery and petrol engine. At town speeds, you glide away in silent EV (Electric Vehicle) battery mode. You can travel for 1.2 miles on battery power alone before the petrol engine cuts in. At this point you move into Hybrid Drive, where the engine supplies power to a generator which supplies the electric motors. If you need a serious burst of power or are travelling at higher speeds, the hybrid system will use the engine to power the wheels. The driver is completely unaware of all this… you simply drive along and the CR-V hybrid system takes care of everything… seamlessly.

At a steady 40mph, the CR-V Hybrid will typically run in EV mode for more than half of the time. At 62mph the car will be in EV Drive for approximately one third of the time, whilst achieving the CR-V’s maximum speed, the car will run in Hybrid Drive.

The new model raises the bar in terms of interior quality. There’s a seriously premium feel. It’s comfortable and loaded with hi-tech kit. All versions of the CR-V Hybrid are equipped with 18-inch alloy wheels. Top-grade cars get a panoramic glass sunroof.

There are four levels of trim S, SE, SR and EX.

To experience the future of modern day motoring book your test drive at your local Vertu Honda dealership. Prices for the Honda CR-V range start at £25,995 with the CR-V Hybrid available from £29,105.