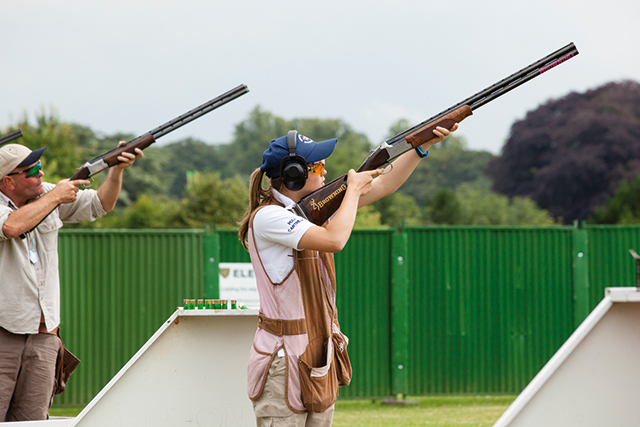 The summer months can seem to be a little lean in terms of shooting opportunities for many of us, but it is clearly not the case for everyone, as I realised when I found myself dragged into the world of social media.
Now I have to confess that for a long time I was of the opinion that social media was for people who perhaps had a little too much time on their hands and would be better employed doing something constructive, rather than discussing with all and sundry what they had for lunch or what they were doing that day. But low and behold I found a whole new world has opened up to me in the form of many shooting related websites that allow me to interact with many others who have the same interests as me.

I have been enjoying this medium via my home computer for a few years but now via my phone I can keep up with events on a minute-by-minute basis if I so require. Many of you will be chuckling at the fact that I am arriving a little late to the party but hey, better late than never. Through Facebook I realise that though the game shooter might be spending his spare time engaged in pastimes that do not include a shotgun, many are out and about pursuing all manner of shooting related activities.

Clay shooting is the most obvious, with many posting where they go and what scores they shoot as well as asking advice on guns and cartridges that might be suitable for their particular discipline. Air rifle shooting is hugely popular, with guns being used for target shooting as well as for fairly serious pest control, as posted pictures of rows of fat bunnies will show testament, as well as pigeons and rats.

Pigeon shooting is right up there at present and this gives me an opportunity to add my twopenny worth with posts of my activities, though they do seem to pale into insignificance when I see some of the bags being shot up and down the country. What really caught my interest recently was an acquaintance of mine who has just returned from a dove shooting trip to Argentina and while he was there he posted reports every day of his activities.

The sheer numbers of doves in some of the corn growing areas has to be seen to be believed; literally millions of birds are present and provide a sporting challenge to visiting guns from all over the world that want to experience the exhilaration and excitement of firing perhaps 2,000 shots per day at driven doves as they come out to feed.

The record number of doves shot in one day by one man is in excess of 10,000. This is extreme but such are the vast numbers of birds that it can be done. He posted pictures daily of both the shooting and the hospitality, and it was for me as a keen shooter a bit like a soap opera that I needed to keep up with daily. Suffice to say that my friend had the trip of a lifetime and if my lottery numbers come up any time soon, I will be on the first available plane.

Back down to earth in Lincolnshire, I mentioned last month about the various shows that we might visit but I failed to mention a new show being presented by the publishers of some of our most well-known shooting and countryside publications. Simply called The Field and Country Fair, it is described as an all-new celebration of field sports and country life and is being held at Cornbury Park in Oxfordshire on 10th/11th/12th of June. All our major shooting magazines are involved and as I am a fairly regular contributor to Shooting Times I will be there on the Friday.

June is also the month that our very own Lincolnshire county show is held and if you have not visited it before it is a treat not to be missed. It is a festival of everything that is great in rural Lincolnshire and beyond, from a myriad of traders trying to persuade us to part with a bit of our money, to displays that will surprise and dazzle us, from motorcycles to skydivers. In addition, the very finest of Lincolnshire livestock will be on parade, with prizes for the best turned out animals. All we need is for the weather to play its part and it will be another fantastic show. I will be there on the first day and will be on the Lincolnshire Life stand at various times, so feel free to pop in for a chat.