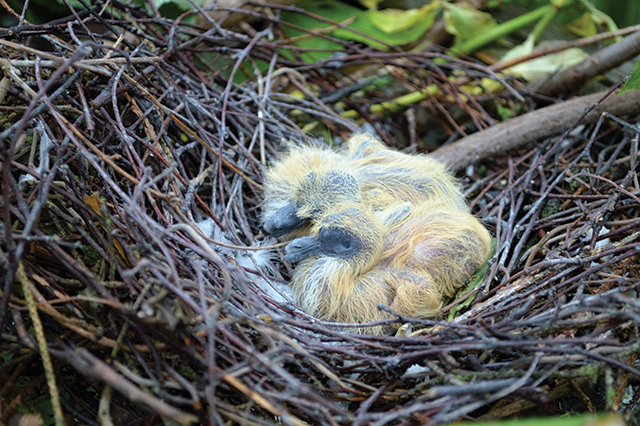 My resolve as a pigeon shooter has been put to the test in recent weeks.
All my life I have seen the woodpigeon as both a farm pest and a fantastic sporting bird and in this respect I have had no qualms about shooting these birds whenever the opportunity has arisen, whether in the depths of winter when birds are hungry or in the height of summer when they are taking full advantage of the harvest stubbles – which also coincides with the height of the pigeons’ breeding season.

A few weeks ago a pair of woodpigeons decided to build a nest on the top of a disused aviary in my neighbour’s garden. The aviary adjoins my garden fence and had become overgrown with a stout elder bush, having grown up through it making it an ideal location in terms of both safety and seclusion. We watched the birds for a week as they ferried sticks and twigs in on a daily basis, totally oblivious to our presence just feet away as we went about our business in the garden.

Soon the nest was built and the hen laid two pure white oval eggs and began the stage of incubating them. By this time both my wife and I had become quite enthralled and took a peek every day just to be sure that she was still sitting and everything was still on course for an imminent hatching. Sure enough, two ugly little squabs covered in yellow down were visible when the bird came off briefly to feed. To our horror our neighbours, who were unaware of the nest, decided to cut down the elder and clear the aviary, leaving the nest totally exposed to both the open sky and the elements, as well as imminent danger from both crows and magpies. We realised that if they were to stand any chance of survival we had to do something quickly to help.

With our neighbours’ agreement I got a few short garden canes and a bit of foliage from a nearby conifer and climbed up a ladder and constructed a form of wigwam over the nest, leaving a gap for the bird to enter; this gave both the nest and chicks some cover and protection from the elements. As I was constructing it, the parent bird was just feet away and the moment I was finished she climbed in and settled down on her chicks as we sat back and felt a sense of relief that we had done all we could.

In the following days we monitored the nest almost constantly and took the opportunity to photograph proceedings as we watched the mother bird take longer breaks from sitting on the chicks as she went off to feed. Each day we watched the chicks get bigger as mother would come back and feed them a form of milk that was regurgitated from her crop. Her time away was getting longer each day and by day fifteen they were fully feathered and walking about on top of the aviary flapping their wings in anticipation of imminent flight. On day seventeen they made the short flight to the top of our garden gazebo before flying away and out of our lives.

Shooting pigeons is a necessity in terms of crop protection and I shall continue to do it but I may well in future take a recess from perhaps mid-May to August in deference to this truly remarkable bird that is the woodpigeon.

A few weeks ago I was invited to participate in a simulated game shooting day; this is shooting clay pigeons but in the format of a formal day’s game shooting with the clay traps positioned in various locations around the estate to throw targets that – as the title suggest – simulates driven game birds. We did a series of drives with the usual breaks for snacks and a drink before ending the day at the local pub for a meal. It was exciting and really tested our skills and is without doubt as near as it is possible to get to the real thing and I can thoroughly recommend you try it, if given the opportunity.

You may have noticed the advertisement for ‘Affordable Days’ on page 57. This is my own venture, in my endeavour to find reasonably priced shooting in and around Lincolnshire for discerning clients who might be looking for shooting without having to break the bank in the process. I have been organising days for friends for many years but have now put it on a more formal footing. I can offer whole days or individual pegs on various estates with bags to suit, so whether you’re a gun looking for a shooting day or a shoot with a day to let please have a look at my website.