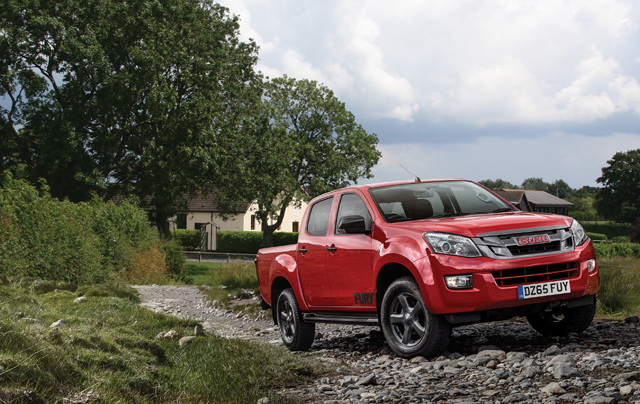 For the second year running, the Isuzu D-Max has won the ‘Pick-Up Truck of the Year’ prize at the Commercial Fleet Awards. The triumph was announced at the ceremony held recently at The International Centre in Telford.
Stephen Briers, Commercial Fleet editor, commented: “Isuzu specialises in pick-ups with a network that understands the needs of fleets. The judges praised the D-Max’s five-year warranty, level of safety equipment and 3.5-tonne towing limit, and said that it is very competitive from a total cost of ownership perspective. As well as being a rugged performer and very capable off-road, the D-Max is equally at home on-road and delivers a comfortable, impressive driving experience.”

The prestigious annual Commercial Fleet Awards are highly regarded by motor manufacturers, supplier and fleet groups and individuals, since the judges base their selections on those who have achieved the highest possible level of excellence in their sector. The jury is made up of the Fleet News editorial team and experts from across the industry.

Isuzu’s UK’s general manager, William Brown, commented: “This is well-deserved recognition of the continuing hard work and impeccable service delivered by our fleet sales team and our dealer network. It’s also testament to the attributes with which the D-Max continues to make a compelling case for fleet buyers: an unrivalled combination of class-leading capabilities, exceptional refinement and low ownership costs.”

The Isuzu D-Max is one of the most cost-effective pick-ups on the market with ultra-low insurance groups (8A to 10A), class-leading residual values and fuel economy (38.7 mpg combined), industry leading fleet packages, all backed up by the company’s pioneering five-year / 125,000-mile warranty.

Following record sales of more than 5,500 units in 2014 (up 33.7% over 2013), registrations for the first eight months of this year are up again by 27.7%, demonstrating the continuous growth of the reputation of the D-Max.

The Isuzu D-Max is available in three body styles – single, extended and double cab – with prices starting from £14,999 (CVOTR) for the entry-level single cab 4×2 rising to £25,999 (CVOTR) for the range-topping Isuzu Blade. The Isuzu D-Max is fitted with a super-efficient 2.5-litre twin-turbo diesel engine, producing 163PS and 400Nm of torque, is able to tow a class-leading 3.5 tonnes (braked) while still returning fuel economy of 38.7mpg (combined), and is available with a six-speed manual or five-speed automatic transmission.