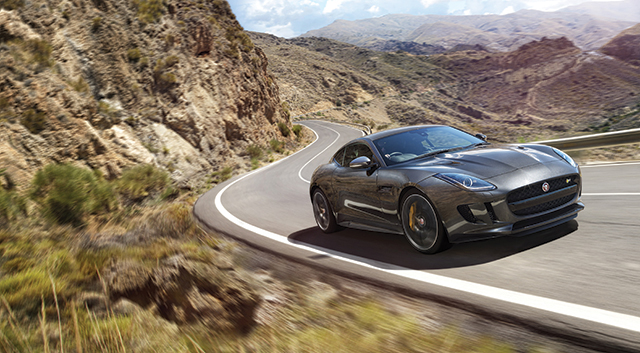 Jaguar Land Rover (JLR) is prolific, and continues to ‘wow’ us with its products. Here we look at the poweful Jaguar F-Type R-Dynamic Coupe.
It has been a few years since the Jaguar F-Type came out of the undergrowth, snarling and biting at everything in its path.

The ferocious big cat has won many fans in that time, and Jaguar continues to develop the F-Type.

The luxury UK-based brand has recently brought out a four-cylinder engined version of the car, and has also fitted some with the All Wheel Drive (AWD) system. I had this on my more traditionally V6 powered F-Type test model.

This is the near-£70,000 starting point for the AWD models, and though purists will argue rear wheel drive is the only drive to have, they forget that a lot of people don’t want a car to have a lively tail-end. Many motorists like to drive their vehicles in all weathers, and not feel intimidated. This is where the AWD system comes in, and joined to an eight-speed automatic gearbox, it feels just as much at home cruising around as it does going all-out attack.

That attack is powered by a 380PS V6 engine – capped off with a fruity sounding exhaust for maximum snarl. It is a car that is easy to drive at very high speeds in relative comfort. But it doesn’t feel light on its feet and isn’t as nimble as a Porsche 911. That being said, a lot of potential customers just won’t care.

Beautiful, capable, and now safer to play with than ever before, the V6 R-Dynamic AWD F-Type is perhaps the best all-rounder in the F-Type range and delivers sporting thrills without super-high costs and snap over-steer. In a nation constantly under siege from the weather, having the stability to go with the power is more than welcome, and, when you think about it, makes more sense.