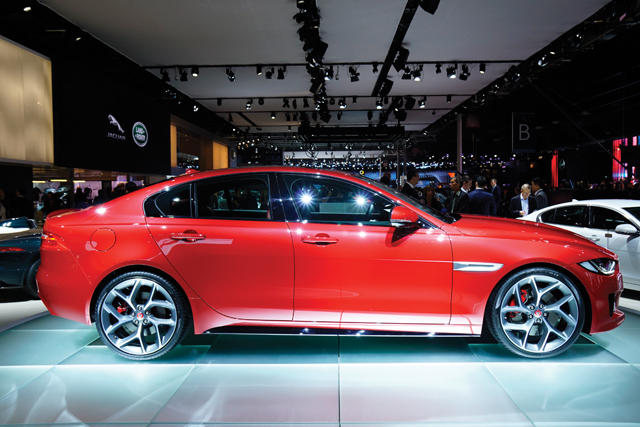 The Jaguar XE comes brimming with technology, ultra-efficient engines and sharp-suited aesthetics.
The smooth body hides a construction that’s 75 per cent aluminium – a material not only sturdier than the steel used by its rivals, but also lighter.

Handling is first-class, too. That lightweight physique comes into its own here. Even if you pick the Comfort suspension setup (you can also choose from Sport and Adaptive), the XE feels quick to respond.

Inside, there are slabs of wood, leather and brushed aluminium but, almost more importantly, is the introduction of the InControl infotainment system. This brings the XE level with its challengers, like BMW, Audi, Mercedes-Benz and Lexus, straight from the off. You can even fine-tune the climate control, play around with the door locks and start the engine with your smartphone!

A sporty drive is key to any Jaguar and that energetic feel starts from the driver’s seat. Like most models that came before it, the XE cossets you, thanks to a raised transmission tunnel and high window line. Another keystone of the Jaguar experience, a sense of sumptuousness, comes in the form of costly materials covering most of the cabin – leather upholstery is in all but the rudimentary model.

To call the XE spacious is stretching the truth, but it’s comparable with the room you would find in its BMW 3 Series opponent. In the real world, that means there’s plenty of capacity for adults up front, but not so much in the rear. There, legroom equals what you get in the German foe, but the low roofline and seemingly tighter interior impacts on upper body comfort.

The Jaguar also offers largely the same interior storage space as you would expect from any of its adversaries. There are pockets in all doors, a pair of cup-holders in the front and a cubby that doubles up as a front-centre armrest. And with 455-litres of boot space you’ll easily get your golf bags in!

Like most modern motors, the XE comes with a full set of active and passive safety technologies to keep you out of harm’s way. Complementing the standard traction and stability control is the innovative All Surface Progress Control – a system that instinctively moves the car off from a standstill in greasy conditions to thwart wheel spin.

On a long commute, the XE is more comfortable than the BMW 3 Series. Indeed, however you choose to spec your Jaguar, it feels clued-in and up to the challenge. Out on the motorway, the car is hushed. In fact, it’s so quiet, engine noise is almost non-existent in petrol models and barely perceptible in the oil-burners.

You can choose between an eight-speed auto ‘box or a six-speed manual gearbox. But the automatic is the sweetest. The cogs feel perfectly harmonised with the engine’s power band and the programmed changes are sharp-witted. It also comes with paddles that allow for even hastier manual changes.

Of the petrol engines – all of which get the automatic gearbox – the 197bhp four-cylinder 2.0-litre lump on the R-Sport model is the one I liked. It feels speedy, as well as being effortless and refined in its operation. It shifts from 0-62mph in 7.7 seconds and tops out at 147mph, returning around 37mpg.

After a few hours in the saddle, it’s abundantly clear that Jaguar has accomplished an amazing balance between ride comfort and handling prowess. Where the BMW 3 Series sits on the dynamics side of the fence and the Mercedes-Benz C-Class prefers luxury, the XE achieves both.