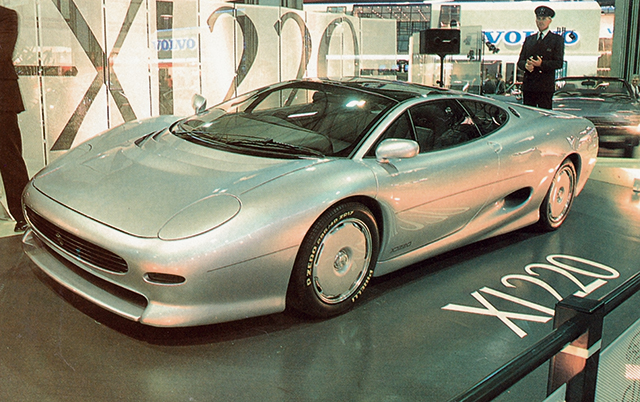 Jeremy Clarkson gives us The Grand Tour of the 1988 Motorshow

They’re all saying that Jaguar have stolen the 1988 Motor Show with their new 200mph, £250,000 sports car. Called the XJ220, this sleek silver machine boasts four-wheel drive, a V12 engine, anti-lock brakes and a host of technical innovations that show Britain can still hold rather more than a candle to the Porsches and the Ferraris of this world.

Mind you, though Britain has proved it is technically capable of producing what will almost certainly be the fastest road car in the world, there can be no doubt that in terms of marketing, we are totally amateurish.

Rover launched what could well be the fastest, most flamboyant hot hatchback yet seen but was it in the press pack? Was it put somewhere prominent on the stand? No, the new Maestro Turbo was tucked away in a corner, almost as if they were embarrassed to have a 150 bhp super hatch on show.

Rover has decided that at this, the first show for fifty years not to feature the Austin name, pride of place should be given to the new Metro GTA. Apparently, it won’t be going on sale until the engineers can make it go more than 100 mph.

The only other piece of British flag waving comes from Aston Martin who had the new, 155 mph Virage on their stand. It looks magnificent though until the old Vantage war horse dies in a few years, it will still be a bit overshadowed.

So what are the surprises? Well, BMW had the Z1 two-seater convertible but even it was outdone by the new M3 convertible complete with one of the cleverest electric hoods I’ve ever seen. Apparently, it will be imported in very small numbers and even then only in left hand drive.

There were one or two world debuts at the motor show: the Audi Coupé and the Daihatsu Sportrak for instance. The first one looks really rather odd while the Sportrak is a good looking toll. Trouble is, I’m not so sure it’s that much better looking than the Suzuki Vitara on the neighbouring stand. Both will be excellent to drive.

The Italians had little to shock though much of that is new. The Alfa Romeo 164 is magnificent; the Lancia Thema is worth a drool. Lamborghini wouldn’t exhibit.

Nissan had the 200 which is a real beauty and the clever, seven-seater Prairie which is nowhere near as clever as the Renault Espace. Toyota had the Supra Turbo which is something of a rocket, and Mazda shocked everyone with the eye-catching RX7 convertible.

The French have been busy little beavers. Citroën, Renault and Peugeot all brought their concept cars along and each had something new too. There was the Golf-sized Renault 19, the frugal Citroën AX diesel and the Peugeot 405 estate.

This has been one of the best motor shows in years. To say Jaguar stole it when everyone else has done so much is rather unfair.

Jeremy Clarkson produced a Road Testing series for Lincolnshire Life Magazine back in the 1980s.