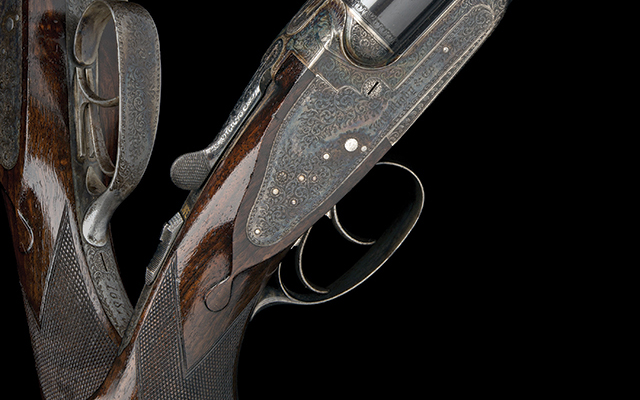 The Holts Summer Auction demonstrated a gratifying consistency to the market with the 768 lots returning a total hammer price just shy of the £1m mark and 75% of the lots sold on the day.

The viewing days were well attended, though the sweltering conditions in central London seemed to encourage a higher proportion of telephone and commission bids than normal – and true to current form, internet participation was increased yet again.

The lion’s share of buyers once more remained within the UK, accounting for just under 60% of purchased lots, with Continental Europe still being responsible for the next largest level of participation but with the United States accounting for the second highest individual total in terms of outlay and number of lots purchased.

The highlight of the auction was undoubtedly the small collection of rifles owned by the Windsor-Clive family, Lots 1150-1155, the most dramatic being Lot 1155 (main picture), a fine Rigby .450 Nitro Express sidelock non-ejector double rifle, soaring past a conservative £10,000-£15,000 estimate to achieve a staggering £56,000 (making it the top lot of the auction).

The market for antique weapons proved as strong as ever, with the Harold Bull Collection. Arguably the most impressive Lot (575) offered in the Antique section was the pair of outsized John Dickson percussion horse pistols (below) ordered by the eccentric collector Charles Gordon – and they fetched an equally impressive £20,000 hammer price against a robust estimate of £20,000-£25,000.