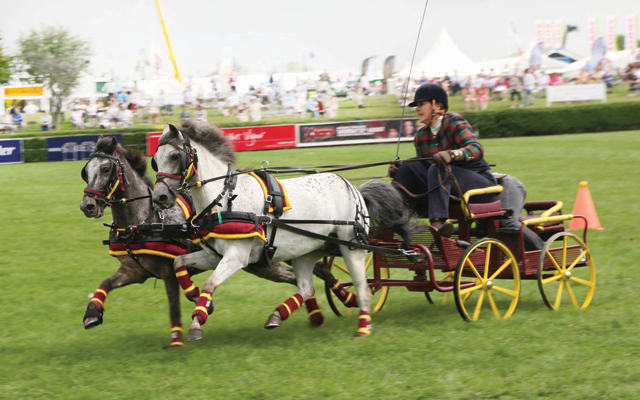 Katy Hurst – remember the name, as she is going places in eventing. Actually, to be fair she has already arrived at the point wheh she is in serious contention for a place in the GB team going to next year’s European Championship in Austria and has been receiving extra training to play a part in defending the title currently held by Britain.
But that is just one side of the coin, for Katy is also competing at the highest levels and so far this year has won several high placings in major competitions. All that and she still finds time to teach, train and school at her Lincolnshire stables.

Just one of her succcesses so far this year was at the Burnham Market International Horse Trials where, riding Weston, she finished fifth in a top quality field.

“We had a clear round in time in the cross-country and good performances in both the dressage and the show jumping,” said Katy. “What a horse! I couldn’t have been more thrilled and to finish fifth in our first international of the season was just awesome. Happy days!”

Happy days indeed and they are obviously going to get better. Katy is always keen to hear from people who might like to get involved in sponsorship or who have horses they might like to add to her team – or indeed for teaching and training.

You can contact her on 07789 005213 or by email to katherine.williams@btinternet.com

…AND SO IS KATE
Another Kate is also going strong with her sights firmly set on the road to the Rio 2016 Paralympic Games, after having to overcome a battle to survive after falling from her horse and seriously injuring her head – despite wearing her riding helmet and protective clothing.

However, after surviving a seventeen-day coma following the fall in May 2009, Kate – now seventeen – was determined to get back in the saddle.

Despite injury to her brain, which has affected parts of her left hand side, such as movement in her fingers, Kate remains very positive.

She said: “I knew from the moment I woke from the coma I wanted to be back on my horse and I have never stopped believing that. I do not look at my disability as a weakness; in fact it has brought new talent out of me.”

Her most recent achievement is her acceptance onto the British Equestrian Federation Excel Talent Programme – one out of only twelve riders in the country to receive this. Kate is studying horse management at Riseholme College and is looking for a suitable, competition loan horse to help make her dreams of Paralympic glory a reality.

She said: “I was delighted to have been talent-spotted at a competition last year and my college has been very supportive about it all, providing the time for me to ride. I ride every day at home and then once a week at The Paddocks Riding Centre, near Grantham.

“Ideally, if anyone has a dressage schoolmaster competing at elementary, medium or above and would be prepared to loan or allow me to compete on, I would be extremely grateful. Any horse would be given a five-star home and access through the Excel Talent Squad to all the top vets, farriers, physiotherapists and trainers.”

GET ALONG TO CASTLEDYKE EQUESTRIAN CENTRE
Here’s a centre with an Olympics connection, so we wanted to know more about Castledyke Equestrian Centre, near Boston and Kate Stewart kindly swung out of the saddle long enough to send us this information.

Castledyke Equestrian Centre was opened in 2007 by local farmers, David and Peter Richardson whose family have farmed at Castledyke for more than fifty years. The brothers, who developed the centre at the family farm to diversify their business, have been careful to develop and incorporate the lovely old existing farm buildings resulting in a traditional feel with the main yard built on a quad. Castledyke is very much a family enterprise, with both Peter’s daughter Emma and son James also being members of the welcoming staff at the yard.

The rural setting north of Boston makes BHS approved Castledyke the perfect place for riding with its 14km of private wide grassy margins for hacking around the fields of wheat and oilseed rape grown on the farm. The riding centre and livery yard, set in 380 acres, was one of only four equestrian centres in Lincolnshire to be accepted as a pre-training camp for the 2012 Olympics. Castledyke also offers a six-furlong all-weather gallop, large outdoor arena, an indoor school, fifty purpose-built stables, tacking-up stalls, equine solarium, and hot and cold wash down facility. There are also modern shower and toilet facilities and a fully equipped conference room with WiFi access making Castledyke the perfect venue for all your equestrian needs. Castledyke prides itself on offering all its clients a bespoke service and whether it is livery for your horse or riding lessons the team at Castledyke will endeavour to tailor a package to suit your particular requirements.

Castledyke Equestrian Centre is a Pony Club centre and meetings are fortnightly on a Friday evening with lots of activities including pony care, games and quizzes and of course riding and you do not need your own pony to join.

Check the Castledyke website (www.castledyke.co.uk) for details of its full programme of events and services or even better come along and see what is on offer. The centre always pleased to show visitors around (no appointment needed) and look forward to seeing you.

So why not get along to Castledyke Equestrian Centre at Gipsey Bridge, Boston, PE22 7BW or give them a call on 01205 280824 and ask for Castledyke’s excellent manager, Jayne Armstrong.

POLE TO POLE
Every horse, pony and rider can benefit from working over poles of any form.

The daily routine of normal riding for the leisure or competitive rider, can take its toll and avoiding the onset of boredom in any horse or pony can be helped with the introduction of poles. The starting point must always be to introduce the poles over a period of time, in order to keep the horse and rider confident, starting with a single pole and introducing further poles to progress to a line of three poles. Avoid only using two poles, as it may encourage a horse to jump them both for the first time, which could give both the horse and rider a fright! There are so many variations that can be worked with by adding further poles and then progressing to raising the poles to increase the workout offered to the horse. The horse will benefit from the increase in the flexibility of the joints and allowing the stride to lengthen or shorten accordingly. It offers a great workout to any horse and care must be taken not to overdo things on the first few sessions when working with poles. It is important when working with poles to only increase one part of the workout during each session; so either increase the number of poles in one session or raise the poles, but avoid adding further poles and raising them at the same time.