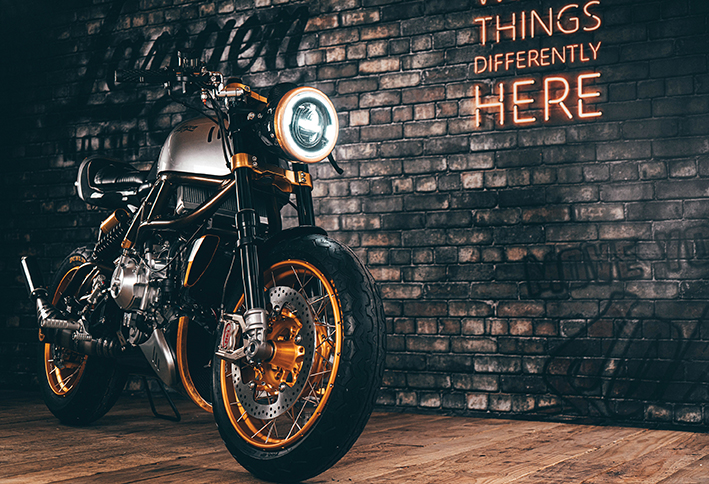 The ground-breaking, two-stroke, road legal motorcycle was seen in public for the first time at a special event held on 23rd-26th September at Blenheim Palace, alongside a host of other beautiful new cars and bikes.
The Two Stroke’s heart is produced for Langen by Vins, who are based in Maranello, Italy. The engine produces more than 75bhp (56kW) and 45Nm (33lb ft). Born from an ‘extra-curricular’ passion project by members of the Ferrari research and development department, the CNC-machined engine has been developed over the last five years and suits the Langen Two Stroke perfectly. A combination of fuel injection, ECU-controlled oil injection, carbon fibre reed valves and electronic exhaust valves enable the engine to produce eye-watering performance figures, yet within an environmentally-friendly set up as a highly tractable, road legal motorcycle.

Langen is proud of its roots and the Two Stroke has been designed, engineered and built in Wigan, Greater Manchester. Partnerships have been made with the best British manufacturing companies to produce components of the bike which require specific expertise and experience, such as Hel Performance brakes, Dunlop tyres and K-Tech suspension. Every detail of the Two Stroke has been carefully considered, crafted and specified to uphold Langen’s values of quality, innovation and tradition.

The Two Stroke is priced from £28,000 plus VAT where applicable. Due to the overwhelming response so far, pre-orders are now being taken with a £1,000 refundable deposit to secure one of the 100 initial bikes