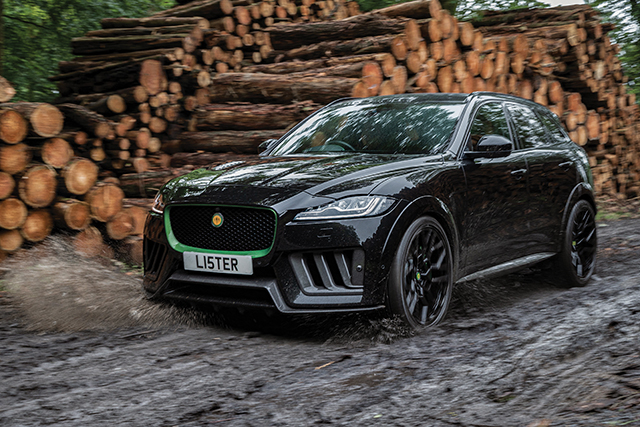 Lister unveils the Stealth –Britain’s fastest and most powerful SUV

The ultimate British SUV offers an unrivalled blend of exclusivity, style and headlining performance at a price undercutting all of its rivals.

Lister Motor Company, Britain’s oldest racing car company, has taken the wraps off Britain’s fastest and most powerful SUV – the Lister Stealth. Based on the already dynamic Jaguar F-PACE SVR, the 666bhp Stealth is the latest in a long line of stunning, hand-crafted and bespoke products from the Cambridgeshire manufacturer – a lineage spanning nearly seven decades.

Lister’s renowned skill for creating exclusive and luxurious, high-performance cars is already evidenced with the introduction of the Jaguar F-TYPE SVR based LFT-666 coupe and LFT-C convertible. Now, Lister enhances that reputation further with the mind-blowing power and speed of the Stealth.

To claim the title of Britain’s fastest SUV, the Stealth required a thorough update to the 5.0-litre supercharged V8 engine found in the factory F-PACE SVR. Lister’s core DNA of performance and driving enjoyment is abundant within the Stealth. The company’s team of highly experienced engineers set to work on the engine and cooling system to ensure it delivers an outstanding 666bhp and 881Nm of torque – a 22% increase over the standard car.

The Stealth will accelerate with the same urgency as a modern supercar and keep on going to its top speed of 195mph. In a sprint from 0-60mph, the Stealth takes a mere 3.6 seconds, making it not only the fastest accelerating SUV Britain has ever produced, but also the most powerful to date. The Stealth adds proof to its claim of being Britain’s fastest SUV after recently beating the Lamborghini Urus, Aston Martin Vantage and McLaren 570 GT in a drag race at the renowned testing ground, VMAX200.

Warrantywise, the UK’s best used car warranty, provides complete peace of mind for customers with an incredible and unprecedented seven-year warranty for this class of performance luxury SUV.
Production is limited to just 100 units with prices starting from £109,950.