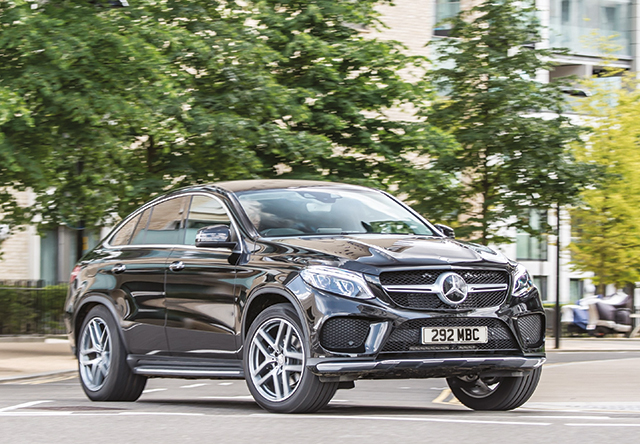 If you love pomp and ceremony, you’ll adore this broad-shouldered offering from Mercedes-Benz.

The GLE 350d Coupe 4Matic AMG Line, on test here, doesn’t know the meaning of ‘subtle’. It doesn’t need to. After all, why buy a machine of this magnitude if you don’t want people to notice you?
So, what exactly is the GLE Coupe all about? Well, it’s Mercedes-Benz’s answer to super-SUVs, such as the Porsche Cayenne, Range Rover Sport and BMW X6. The goliath houses either a 3.0 litre V6 diesel, churning out 255bhp or a V6 petrol, producing 362bhp. Both engines come hooked up to a slick-shifting, nine-speed automatic ‘box.

Behind the wheel, the diesel model has more than enough pull for British roads and, in AMG Line trim, you can either waft or thunder along encased in splendid surroundings. Kit includes heated front seats, climate control, a DAB radio tuner, auto dimming and folding mirrors, parking sensors and a reversing camera.

On the move, body roll is not really noticeable – which, considering the heft of the GLE, is a feat of engineering and design in itself. The permanent four-wheel drive set-up provides tons of traction, too, so the mighty Merc is safe, as well as talented at delivering driving enjoyment.

You can sharpen up the steering and throttle response, and you can even adjust the air suspension at the touch of button. For instance, the Stuttgart firm’s ‘Sport’ setting just ups the ante a bit, providing a heavier steering reaction and a more ‘on-rails’ like experience through corners. But, if you don’t want your passengers throwing up, the Merc is best left in its standard ‘Comfort’ mode. Here, the SUV is in its ‘natural’ state, allowing you to control its power in a more measured way, while the well-weighted steering guides the car through twisty tarmac effortlessly, rather than crazily.

The air-suspension hides the fact that you’re riding around on 21-inch alloys by soaking up even the evillest of potholes. There is only one price to pay for the awesomely outsized wheels – and that’s a bit of extra noise. This is only really noticeable at motorway speed, but combined with 70mph wind blast around the wing mirrors, the calm of the otherwise hushed cabin can become threatened at times.

The GLE Coupe will take five-up, no problem – and even though it’s a coupe, rear passenger head and leg-space is ample. Only six-footers, upwards, will be vaguely bothered by the low-slung roofline. Room in the boot is very good, too, with plenty of space for a pushchair and the weekly shop, or a stack of suitcases. Only the high load lip rains on the parade, making the lifting of heavy items into the cargo area more of a chore than it should be.

When all is said and done, the Mercedes-Benz GLE 350d Coupe 4Matic AMG Line is a well-appointed, fine-driving vehicle. The engine and automatic gearbox are nothing short of perfect; the steering response and handling are bang on the money – and even the sophisticated switchgear takes some beating.