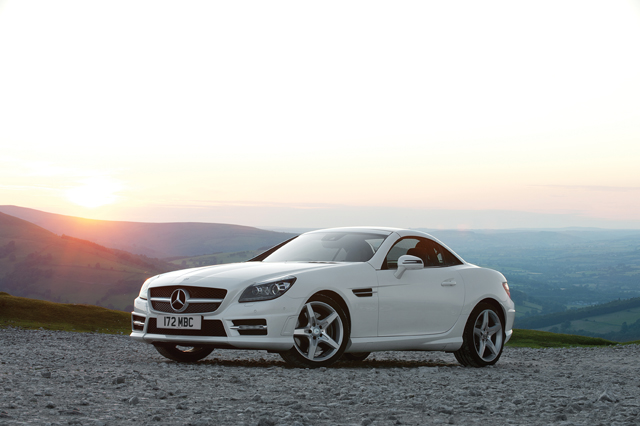 If you really like driving then a roadster is the sort of car you probably desire – unless there’s one in your garage already.
There’s something intoxicating about two-up, open-top motoring. Traditionally, these cars are powered with petrol but Mercedes-Benz has gone one further with its SLK 250 CDI Roadster and fitted a diesel engine into it. While oil-burning drop-tops have been a premium manufacturer product for a few years now, this is the first two-seat, rear-drive convertible that runs on the stuff.

The 204 bhp four-cylinder lump puts the Mercedes-Benz at the top of its class in several respects. With an average fuel consumption of 56.5 mpg it’s the most economical roadster in its sector. The frugal fuel drinking makes the SLK 250 CDI a car with superior long-distance qualities. It is, for example, quite possible to drive from the North Sea in the UK to a beach on the Mediterranean non-stop. Supportive sports seats, a decent suspension setup and the largest luggage capacity in this car category also do their bit to create the right conditions.

I drove the 250 CDI AMG Sport model. Thanks to bags of low down shove and a 7G-Tronic Plus automatic transmission, it accelerates from 0-62 mph in 6.7 seconds. This means the car has another feather in its cap: it’s the most powerful diesel model in its class. The result is dramatic driving enjoyment both on twisty country roads and motorway stretches.

As it shares the same genes as other members of the SLK family, the 250 CDI combines its alert acceleration with stylish comfort, a stunning sports car design and day-to-day suitability.

The SLK 250 CDI is available with a choice of three versions of the German motor manufacturer’s famous vario-roof – one of them the panoramic vario-roof with Magic Sky Control. This glass top can be changed from dark to transparent at the touch of a button.

There are also three suspension versions available: a conventional steel suspension, a sports suspension with a stiffer spring and damper setup or a suspension with an electronically controlled, automatic damping system. The latter is part of the Dynamic Handling package, which also includes the Direct-Steer system and the Torque Vectoring Brake developed by Mercedes-Benz for particularly responsive and predictable handling characteristics.

The SLK 250 CDI went on sale in 2012, yet it still looks like it’s just rolled out of the Mercedes-Benz design studios. With its pulling power and economy, it’s obvious why it’s such a good choice – even if you do need over £35,000 to afford a brand new one.