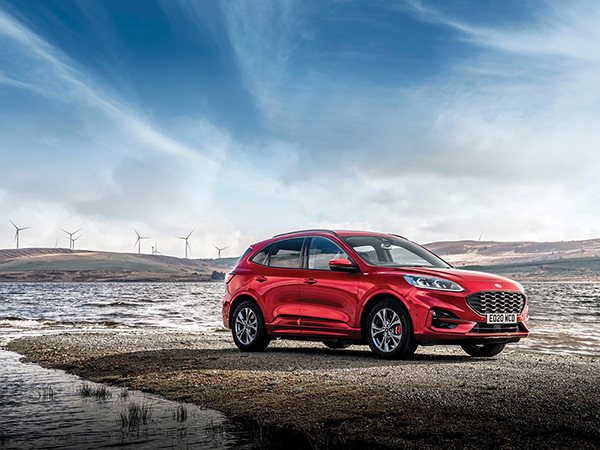 The Kuga is the blue oval’s most popular SUV in Europe.

The latest model is one of Ford’s most electrified cars to date. The all-new version comes with a range of powertrains, but it’s the Plug-In Hybrid (PHEV) in ST-Line X trim that I’ve tested here. A new, continuously variable transmission (CVT) has also been thrown into the mix.

The PHEV’s electric motor is paired with a 2.5-litre petrol lump giving a maximum ouput of 225PS. This translates to a 0-62mph time of 9.2 seconds and a top speed of 125mph in the real world. That’s quick for a five-door family SUV. What’s more impressive is that you can use the Kuga PHEV as a pure electric vehicle for 35 miles until the petrol engine kicks in – and it’ll get up to 85mph in this setting.

The size of this SUV helps to make it graceful and stress-free to operate. It’s not a Goliath, and it’s not tiny either – it really does feel in its comfort zone on British roads. The steering gives the same feeling of confidence at speed as it does in the Ford Focus. But that’s not a surprise as the Kuga uses the same architecture as the latest Focus.

In town, the Kuga’s a doodle to manoeuvre in small streets. Parking is undemanding too. Ultimately the SUV will be comfortable to live with every day in the UK.

There’s ample room in the front for driver and passenger, and you’ll get three in the back at a push. Yes, four occupants will be comfier than the five the SUV is billed to carry – but it’s a similar story for most vehicles in this segment.

The split-fold rear seat now glides backwards and forwards by 150mm, enabling you and your onboard crew to make that first world decision: should you have more space for your legs or more for the luggage in the boot? It’s a terrible dilemma – but it’s a nice problem to have. With the seat ratcheted all the way back, a very long-legged human won’t have cause for concern. The cargo area will still hold up to 411 litres of luggage in this situation. And if you’re desperate to make more room, then you can make use of a maximum of 581 litres of space with the seat slid as far forward as possible.