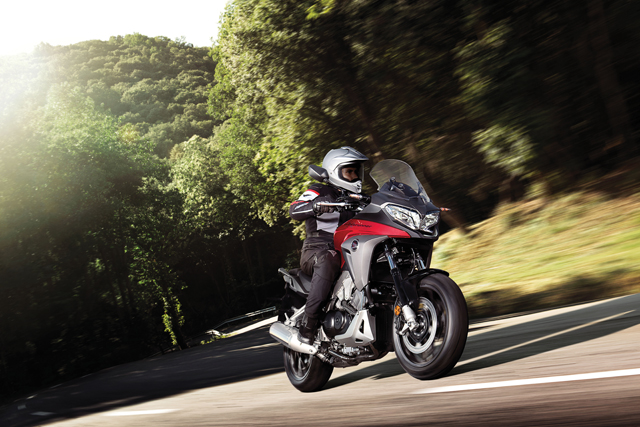 Honda Motor Europe announces the new 2015 VFR800X, which boasts a host of changes and new features to confirm its position as a premium sports tourer.
The 2015 VFR800X benefits from revisions to its 800cc V4 engine for more top-end power and mid-range torque, sharper looks all round, longer travel suspension, and new wheels and brakes. Other features include S-TCS, ABS, LED lights, self-cancelling indicators and heated grips as standard.

The rider now also benefits from the same kind of Selectable Torque Control System (S-TCS) fitted to the Crosstourer. Two levels of S-TCS are available (plus off), to sense imminent loss of rear wheel traction, and seamlessly reduce torque to allow the tyre to grip.

The VFR800X is a true VFR – a motorcycle designed for hard riding fun, but with style, comfort and practicality. Accordingly, the seat is now adjustable, offering two height options, and five-stage heated grips and Honda’s self-cancelling indicators are both fitted as standard. New, full LED lighting adds a distinct presence and premium finishing touch.

The 2015 VFR800X was showcased in the UK at Motorcycle Live in November and is now available through Honda UK Motorcycle dealers.