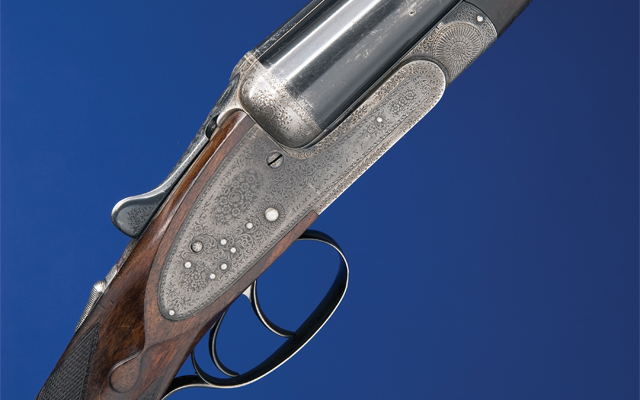 One of our heroes

At this time of recognition for those who lost their lives in wartime, a special item owned by Flight Lieutenant William Reid VC.
Lot 1420 – a 12 bore sidelock ejector rib engraved Army and Navy C.S.L. London. Some colour, 30-inch barrels, best bouquet and scroll engraving. Estimate £1,200-1,600.

The provenance says it all, owned by Flight Lieutenant Reid who flew from RAF Skellingthorpe, 61 squadron aged 22, recently converted to Lancasters. He was in command of O-OBOE mission to bomb the industrial area of Düsseldorf. Soon after crossing the Dutch coast Reid’s Lancaster was attacked by an ME110, the rear turret was damaged and Reid was wounded in the head, shoulders and hand. Another attack followed killing the navigator and fatally injuring the radio operator. Düsseldorf was still 200 miles away but Reid opted to carry on, and did the job right on target. Despite slipping into semi-consciousness on his return he managed to land, in heavy mist. For this he received the VC. On a later raid he was shot down and spent time in Stalag Luft III. After the war, he retrained in agriculture, carried on shooting and ran an estate in Scotland. The gun was gifted to him by Lady McRobert. He shot with it until shortly before his death in 2001.

Army and Navy Serial Number 21558, it duly exceeded expectations to achieve £2,200 before commission – some recognition of an extraordinary hero.

Vendors or interested parties can always call Simon Grantham on 07860 300055.