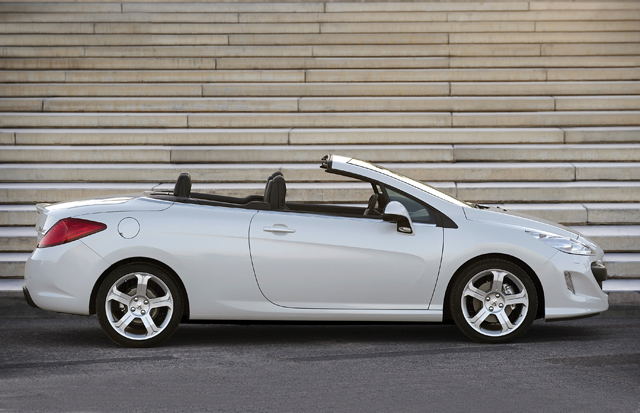 Words by:
Tim Barnes-Clay Featured in:
May 2011
Share Article

Here comes the sunshine!
Research shows that UK roads are busiest on a Monday morning during rush hour, whilst US citizens tend to be keen to escape the city on a Friday afternoon, as this is when they get stuck in the worst traffic of the week. However, the UK is doing a much better job managing traffic congestion in its major urban centres than its US counterparts. That might not be a consolation when you still spend almost two days stuck in traffic every year at this side of the pond.

However, what might provide some relief while stuck in the jams is Peugeot’s stylish 308 CC. The French-made coupe cabriolet is based on the sub-structure of the popular 308 hatch. It comes with air conditioning, a leather steering wheel and centre armrest storage as standard. In-car entertainment is provided by a six speaker radio/CD player and audio pack with remote control. Safety and security features include an electric folding retractable roof, six airbags, unfastened seatbelt detection system and ESP (Electronic Stability Programme).

The most fun part of the car – the folding roof – only takes 20 seconds to lower. With just a press of a switch it stows neatly into the boot. That means not a lot of luggage can be stored with the roof down, but if you’re in the market for a convertible, cargo space isn’t necessarily first on your list of priorities.

The range-topping GT model can be specified with a petrol or a diesel engine. My 2.0-litre 140bhp oil-burner came with features including leather trim, a windstop, larger 18” alloy wheels, tyre pressure sensor, and front and rear parking aids. The excellent Airwave neck heating system, similar to that in the Mercedes SLK, is standard equipment on the GT – and great for taking the chill out of open top driving. Further features include an electric pack, which includes electric seat adjustment.

When you get on the move, the HDi turbodiesel engine is refined and the six-speed manual transmission is slick. With 192lb-ft of pulling power, the engine response, even at low engine speeds, is first rate and it pulls right through the rev range, meaning less gear changing is needed.

Top speed for the Peugeot 308 CC GT HDi 140 is 129mph and the official 0-62mph time is 11.1 seconds. That’s surprising because the 308 CC feels quicker off the mark. The coupe cabriolet makes up for it though by returning just under 50mpg, making it an economical car as well as a pleasurable one to drive or simply sit in when you’re stuck in rush hour traffic.