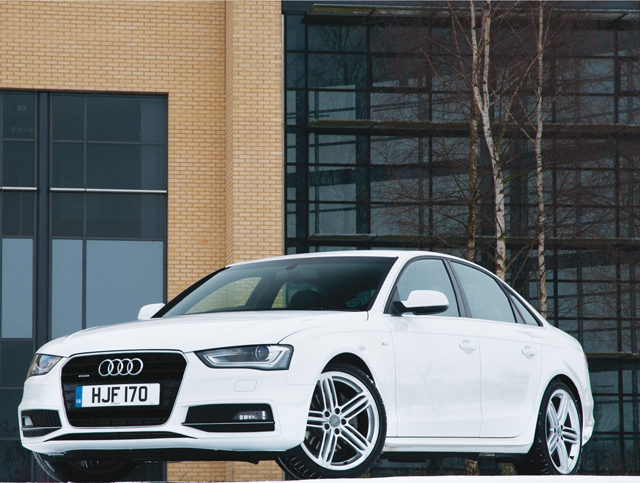 If you’re after a prestige symbol in the compact executive car market then four shiny silver rings should do it. The Audi emblem of four linked circles will elevate your standing in the hierarchical world of business in an instant.
The logo denotes one of Germany’s oldest automobile manufacturers and it has represented quality for generations. It symbolizes the merger in 1932 of four previously independent motor vehicle producers: Audi, DKW, Horch and Wanderer. These companies are the foundation stones on which the present-day automaker is built.

Audis tend to have a less aggressive perceived image than, say, BMWs and, to some extent, the make is still an enigma. Why? Well, it’s a high-end luxury brand, but its philosophy has always been about understatement. It’s never been about shouting from every rooftop – and that tends to be appreciated by motorists who want motion without commotion.

Get into any diesel or petrol powered Audi and you’ll soon see that the Bavarian based company’s focus is on craftsmanship, fine quality and leading edge technology. The A4 2.0 TDI S line Saloon that I drove for a week was no different.

The A4, with its elegance, sportiness and emotional appeal, forms the centrepiece of the Audi make, and in 2011 the car became even more defined with an update. The latest look accentuates the horizontal lines at the front end. The bonnet is more arched, the upper corners of the grille are tapered, and the Audi rings are highlighted three-dimensionally.

The redesigned bumpers are striking with their angular air inlets, their revised grilles and the flat front fog lights. The headlights have also changed, with a slight wave at the bottom edges, and a rearranged interior. Xenon plus headlights are available as optional equipment, but standard on the sportier S line model I tested. The taillights reflect the shape of the headlights, and have harmonized strips of light-emitting diodes (LEDs). The bumper, with its diffuser insert, hints at the car’s athleticism, as does the exhaust system, with its twin tailpipes.

Inside, the A4 has smart touches of chrome and high-gloss inlays. Operation of the beautifully damped controls is simple and intuitive, and the black leather seating with the S line Sport package is the icing on the cake. The Saloon’s luggage compartment has a large 480-litre capacity – 962 litres with the rear seats folded down, so driving a nice compact executive car doesn’t have to come at the expense of practicality.

The chassis of the A4 is striking with its sporty precision, high ride comfort and safety. The 175bhp turbo diesel engine in the 2.0 TDI S line Saloon combines pulling power with efficiency. Top speed is 143mph and 0-62mph is reached in a swift 8.2 seconds. The car’s electronic stability program system further improves handling, and its large brakes – with ventilated front and rear disks – offer supreme stopping strength.

What’s more, CO2 emissions are only 120g/km and an average of up to 61.4mpg can be teased from the tank. This means the Audi A4 is made for mile-munching and so, along with its tasteful image, will serve any senior manager who ‘lives on the road’ very well indeed. Price: £29,635 on the road.