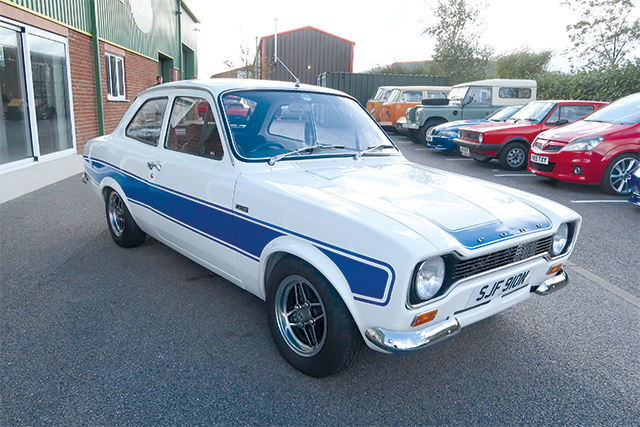 That’s what Ford’s RS moniker stands for.
In the late 1960s Ford had begun to build high performance cars in small numbers, beginning with the Escort Twin Cam in 1967. Their idea was to build high performance versions of their mainstream production cars so Ford could credibly compete in motorsport in which they indeed had great success winning the RAC Rally for eight consecutive years from 1972 to 1979 in the Escort RS1600 and RS1800 models.

The ‘Advanced Vehicle Operations’ department was set up at Ford (AVO for short) and a new facility was established in Aveley, Essex solely to design, develop and build the cars, which were sold exclusively through Ford Rallye Sport Dealers. The first car was driven off the production line by Graham Hill in November 1970. However, in the early 1970s the energy crisis caused a slump in car sales and the AVO factory closed for good in 1975.

Due to the relatively short life of the AVO operation and the fact that the cars produced were driven hard, the number of original cars dwindled significantly over the years and hence the value of these vehicles have started to increase. Today, the AVO owners club collects details of AVO cars and has been keeping a register of genuine cars over the last thirty-five years, so buyers and owners can be sure they are buying the real thing!

Woldside Classic and Sports Car have a superb example of the 1974 Mk 1 Ford Escort RS2000 currently in their showroom in Louth. According to the AVO build plate this is a UK supplied RS2000 built in May 1974. Originally finished in Diamond White the car was delivered with cigar lighter, temperature gauge, reversing lights, hazard warning lights, heated rear window, alternator and a pre-engaged starter motor.

In 1999, the previous owner took delivery of this very tired RS2000 and embarked on a mission to build himself the best RS2000 possible. Thankfully, he was no stranger to high quality workmanship as he worked in the bodyshop of one of the most highly regarded Formula 1 teams in the world. However this was no mean feat, like most Escorts twenty years ago the car had deteriorated to a very poor condition.

Firstly, the car was fully dismantled and it was decided to have the bodyshell and panels dry stripped by the plastic media process. Corroded areas were then abrasive blasted and subsequently coated with a phosphate base anti rust coating. Then followed the lengthy process of repairing all areas of concern on the bodyshell; a photographic record of this time intensive process is with the car clearly showing the quality of workmanship – as much care was taken to the underside of the car as the outside, with the same glass quality paintwork.

All of the suspension parts, brakes and drivetrain were either renewed or prepared to an ‘as new’ condition prior to refit to the car. The 2.0ltr Pinto engine was also stripped and rebuilt before being detailed and refitted. Fast forward to 2006, the final coat of Diamond White had been applied and the car was rebuilt to the obvious joy of the owner – he must have been very proud of his achievement.

Since then, the owner, a member of the Ford AVO Club, has enjoyed the car in the summer months and taken it to shows – only 1,500 miles have been covered since the rebuild. The condition today is close to the condition when the restoration was completed in 2006 with the only further improvement being a re-trim as the previous owner preferred to retain the original interior.