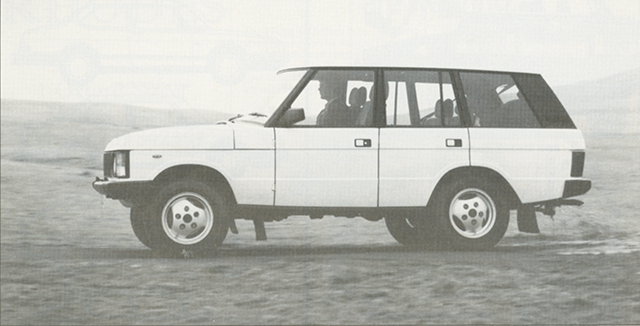 The first ideas for a road-going Land Rover came to life in the very early fifties, when the Rover management were contemplating a vehicle that would combine the Land Rover’s ruggedness and off-road capabilities with the luxury and civilisation of the traditional Rover car.
A great many false starts to this project were made, usually due to the pressing need to get other Rover models into production, and it was not until the late sixties that the Range Rover as we know it began to take shape in the design offices of Rover, then a part of BLMC.

Simplicity had always been the watchword for the go-anywhere Land Rover, and although the Range Rover was expected to appeal to an altogether more sophisticated clientele, its essential elements are very straightforward. A separate chassis is the basis of the Range Rover, with a combination of box and tubular section members. The suspension is coil springs all round, with double-acting shock absorbers, which gives a supple ride while allowing the wheel to have enough ‘travel’ to keep the car stable over very rough ground.

The engine, the famous 3528cc, all-aluminium V8 is mounted at the front, with a five-speed, manual gearbox mounted end-on. Attached to the gearbox is the lockable transfer box, which co-ordinates the power to the back and front wheels. Four-wheel drive is permanent on the Range Rover, although there are two sets of gear ratios for both rough ground (low) and motorway cruising (high).

On top of this mechanical specification is the body, a welded steel monocoque structure, onto which the largely aluminium, and therefore rust-proof, outer panels are bolted. The whole body structure is then bolted to the chassis by means of rubber bushes, making the Range Rover’s ride and handling seem even more smooth.

Originally offered in two-door form only, four doors are now available, and indeed the four-door car has largely supplanted the two-door as the standard model. All versions have a two-piece tailgate, with a horizontal split so that the bottom half can be dropped flat to take extra-long loads.

The Range Rover was always meant to be targeted at the upper end of the market, and the proliferation of (mainly) Japanese imitators that have emerged since its launch have tried to chase the same customers. The Range Rover stands alone, however, as an international status symbol with few equals, either in prestige or capability.

Article originally published in the May 1987 issue of Lincolnshire Life.