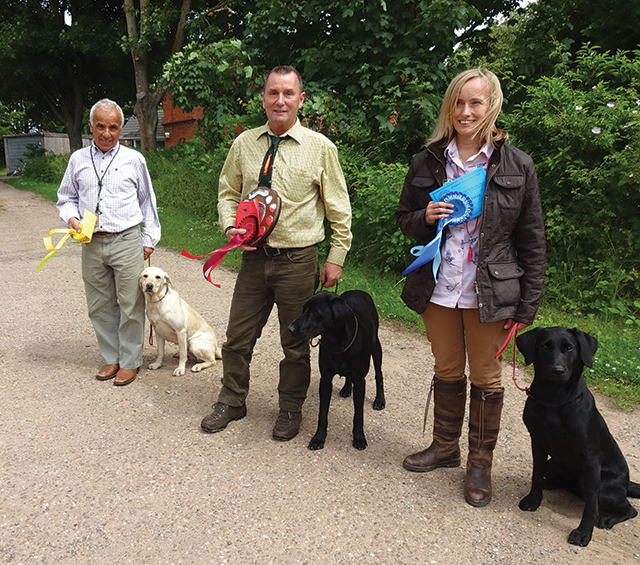 We thank Mr and Mrs R Howard for allowing us to hold our competition here and Mr and Mrs M Strawson for sponsoring these tests. Our judges were Laura Marsh, Sue Lowe and Sarah Coomber-Smith. Martin Eveleigh was the Chief Steward.
There were four tests for each of the 23 dogs. Junior handlers did the same tests as the veterans.

For Test 1 a mark was thrown a short distance away onto the track for special puppies. The dummy for the puppies was further away and, for the veterans and Junior Handlers, even further. These latter three groups then returned along the track for a blind that had been put out whilst the dog was returning with the mark.

Test 2 was in sugar beet. For special puppies, it was a short mark. The puppies had a double mark, picking the last dummy down first. The other two groups retrieved the first dummy down first and had to go a greater distance.

Test 3 was a short mark on the grass bank alongside the water. When this was picked, the special puppies were turned to retrieve a dummy thrown into the water. For the other dogs, the mark on the bank was thrown and then the mark in the water. Veterans and Junior Handlers did the same test but the dummies were thrown further away.