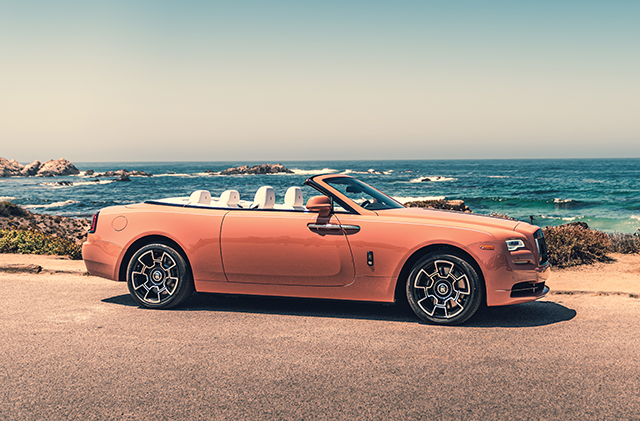 If the standard Rolls-Royce Dawn is the pinnacle of luxury, then the Black Badge is the identical but slightly evil twin.

A bit like a gravelly-voiced baddie in a Bond movie, there’s an aura of well-roundedness and sophistication, but you know you’re playing with fire if you get too close.

Black Badge, as the name suggests, replaces much of the chrome with, erm, black. As a result, it looks more imposing than the standard Dawn and will likely appear in more pop music videos than its more modest sibling.

Underneath, the suspension gets an upgrade, along with a more responsive throttle and a different steering rack. The brakes are bigger than the standard Dawn too.

The Black Badge will do 0-62mph in 4.9-seconds – and you’ll know about it. The engine noise is delightful as you put your foot down, and it accelerates very quickly, but not in a boisterous or ungainly way.

Performance cars always have a feeling of mischief to them, but the Rolls-Royce manages to achieve ferocious acceleration while still reminding you how grown up it is.

Inside, you wonder if there’s a car manufacturer in the world that can do better. The Dawn is phenomenally luxurious, filled with exceptionally comfortable leather seats and touches of red.

In the front, there is a lot of space, and, being a convertible, you’d imagine that it’s a requirement to have tiny legs to get into the back. But you’d be wrong. Thanks to the car being almost 5.3 metres long, you could be nearly as comfortable in the rear seats as you would be in a four-door Phantom.

There’s 295 litres of space in the boot, too, although this reduces with the roof down.

When it comes to safety, it won’t surprise you to know that Euro NCAP hasn’t crashed any Rolls-Royces into a concrete block. Nevertheless, given its size and the fact that BMW owns the company, you shouldn’t have an issue with protection, especially given most Bimmers are getting five-star ratings. If you see the size of the Dawn, you’ll agree that anything it comes into contact with is likely to end up the worse off of the two.

Fundamentally, the Rolls-Royce Dawn Black Badge is a joy to behold. Whether it’s worth the extra dosh over the standard Dawn is probably a pointless argument to have. Rolls-Royces are all about personalisation, so it’s a case of which one you want, rather than factoring in mundane things like budgets.

If you do want an aggressively styled Roller, then the Wraith Black Badge might be one to look at, as the Dawn’s more modest shape means it’s probably a halfway house between the standard Dawn and the Wraith.

Mind you, the Wraith is a hard-top, whereas you can flaunt your wealth to the masses with all the visibility in the world if you have the Dawn and put the roof down.

It’s rapid for such a hefty car and, for something not built for sporty handling, it’s not bad around the bends either.
All you need to do is find the best part of £350,000.