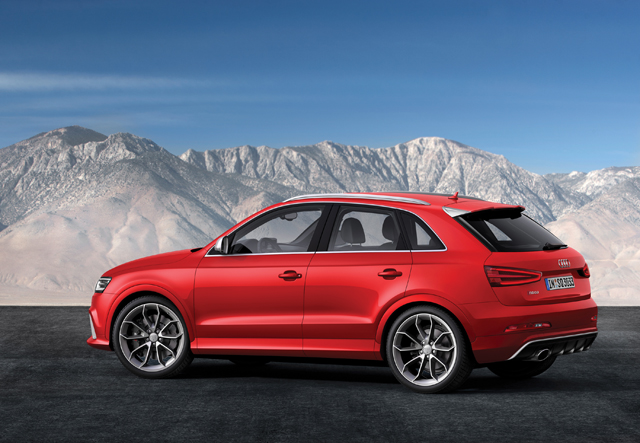 “The RS Q3 transfers the performance philosophy of Audi to the compact SUV segment, thereby creating a new performance class,” says Franciscus van Meel, managing director of quattro GmbH. “In addition to the RS 5 Cabriolet, RS 6 Avant and RS 7 Sportback, the RS Q3 is the fourth RS model that we are launching in 2013. The RS family is growing to eight members – more than ever.”
The Audi RS Q3 also demonstrates its special status within the Q3 line-up with RS-specific body detailing, including a high-gloss black honeycomb front grille and RS bumpers, the front treatment including a quattro emblem in the air intake and the rear a distinctive diffuser and large elliptical tailpipes. A roof spoiler, roof rails in matt aluminium and special door sill plates and door trim strips also add emphasis. At 4,410mm in length, the top ranking Q3 is 25mm longer than the standard car. It weighs in at 1,730kg.

For even more differentiation, RS Q3 customers can choose an exclusive body colour – Sepang Blue pearl effect – from the list of eight available.

The RS accents are naturally also to be found inside. The instrument cluster has grey gauges with white scales and red needles. Contrasting stitching in rock grey trims the three-spoke multifunction steering wheel with its flat bottom as well as the gear selector lever. The MMI and driver information system displays welcome the driver with the RS logo. Drivers can call up the boost pressure, oil temperature and a lap timer via the RS menu in the driver information system.

Black headlining is standard, with a lunar silver headlining available as an option, and in contrast the pedals and foot support are finished in bright aluminium. The standard inlays are piano black, but aluminium race or carbon inlays designed by quattro GmbH are also available as alternatives here.

The luggage area has a base capacity of 356 litres, which can be increased to 1,261 litres by folding down the split rear seat backs. A practical reversible load liner is standard, and customers who have even bulkier loads to transport can specify a towing bracket.

In the infotainment area, a modular component system offers a wide range of options; at the top there is the hard-drive based navigation system, MMI Navigation plus. A BOSE surround sound system driving 14 loudspeakers can also be added, bringing up to 465 watts of output power, while Audi connect brings the Internet to the car. Highly advanced driver assistance systems can also be incorporated.

UK ordering will begin in the summer ahead of first deliveries in late 2013.