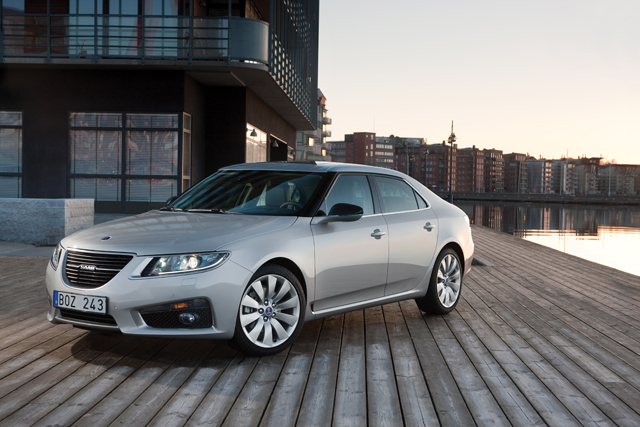 How seductive are the memories of times long gone: of times we might have lived through. So an historical perspective is useful when attempting to place a legend in context.
The Saab name is legendary for various reasons. You’ll probably recognise the name for the values attached to its rallying history in the hands of the great Erik Carlson, Stig Blomqvist and Per Eklund.

The new 9-5 in the flesh looks slick, sleek, well groomed and, thankfully, unmistakably Saab, despite having been designed during GM ownership and using the new sophisticated Insignia platform. This means there’s lots of space inside the tastefully appointed interior with its quality of fixtures and fittings.

From the outside discreet, understated and confidently adult, it’s the very antonym of ostentatious: an imposing and dignified looking car well able to do the job for which it was designed. At rest it oozes poise, purpose and most of all, that indefinable something without which any car is a mere lump of soulless metal.

So, I am pleased to report that even in these dour days of economy, Saab equals the visual appeal and driver satisfaction, that surely will equal ‘success’.

The 9-5 range starts at £26,695 for the 1.6 petrol turbo and rises to £37,795 for the 4WD 2.8 V6 300bhp twin turbo. Tested here is the 160PS, 2-litre turbo diesel with optional 6-speed automatic transmission, in Vector trim, which gives such luxuries as heated leather and textile seats, climate control and cruise control and costs £28,035 – this version is proving to be the most popular. Understandably so because it offers a good combination of performance and economy for such a big car. 130mph is obtainable and an overall fuel consumption figure of 41.5 mpg is quoted for the automatic.

The turbo diesel performs very well indeed and with Saab’s mastery of turbocharging, there’s walloping torque where it matters, enabling safe and rapid overtaking situations where the competition might be compromised.

Ride quality is good enough to swoosh you sweetly along. It’s a well controlled ride – and it needs to be, because this big Saab weighs over 1.5 tons. When the roads turn twisty big saloons often become bloaty, but not this one. It’s hardly balletic but it’s certainly capable of cleanly and confidently whisking you through bends at a fair old pace.