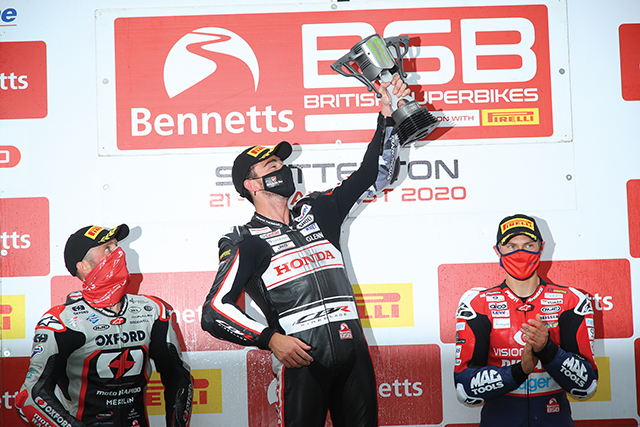 Sensational wins for the all-new Fireblade at Snetterton

The Honda Racing team leaves Snetterton leading both the Bennetts British Superbike and the National Superstock 1000 Championships, after Glenn Irwin and Tom Neave take sensational wins in both classes aboard the brand-new Honda CBR1000RR-R Fireblade SP.

In the first race of the day Glenn crossed the line second, to take his fourth podium of the season. For the final race of the day Glenn lined up ninth, but soon made his way through the pack and by lap seven he was in the podium top three. Over the next three laps he set his sights on the front and made a pass on Christian Iddon to snatch the top spot, taking his first win of the 2020 season.
Extending his championship lead over his rivals by 23 points, Glenn also claimed the Monster Energy Race of Aces trophy, as well as the Bennetts British Superbike Championship, with fans voting him Bennetts Rewards Rider of the round.

Teammate Andrew Irwin started the final race of the day from the second row. Pushing hard over the 16 laps, he collected valuable championship points, but lacking race data he suffered front tyre issues and came home eighth. Andrew remains in the top six in the championship standings with 58 points.

Over on the Superstock side of the garage Tom Neave took the winning tally of the new Fireblade to five wins so far this season across the BSB and Superstock classes. Making some changes for the warm-up, Tom was feeling confident for the 12-lap race and starting from seventh he wanted his second race win.

Cutting through the highly competitive Superstock 1000 field, Tom made up places and on the penultimate lap he took the lead, where he eventually crossed the line to take his second win of the season, extending his championship points tally.