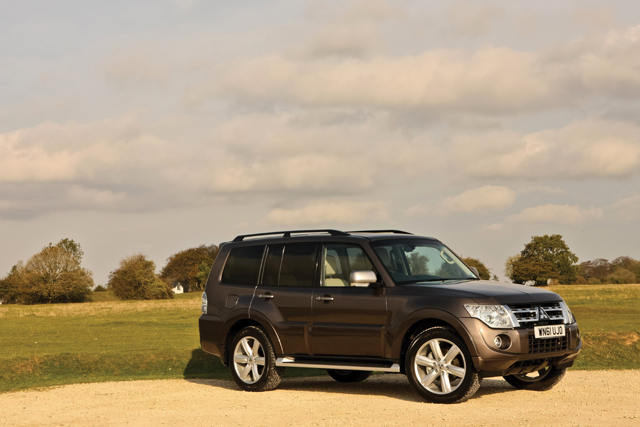 Looking back nearly three years to my last encounter with a Shogun in long wheelbase form reveals that a great deal has changed, even though visually, to all intents and purposes, it looks very familiar.
However, under the revised bodyshell there are some serious changes. For example, the engine is a much more powerful four-cylinder, 3.2-litre turbo diesel unit developing a highly flexible 197bhp compared with the earlier car’s 168bhp. And there is a new, independent rear suspension system.

The additional power output has been achieved without improving the claimed performance or the acceleration. Mitsubishi claims a top speed of 111mph and acceleration from rest to 62mph (100kph) in 11.1 seconds, though the combined fuel consumption is slightly improved at 33.2mpg or 34.4mpg for the manual transmission model.

In real terms, these figures are sensible for a seven-seat vehicle of this size and weight and designed, according to Mitsubishi, to be able to tow up to three tonnes.

I reported that the earlier Shogun had projected a classier image. Climbing aboard was relatively easy, thanks to a running board and a grab handle on the front pillar. My immediate impression was that finish, quality of material, build quality and interior style had all gone up, closer to a premium brand product – not luxurious by any means but suggestive of good taste.

From the very first Shogun, I became convinced that the creators had designed it to keep going even when conditions got very tough. This one is certainly no sheep in wolf’s clothing. The mechanical package is clearly capable of serious mud plugging, river wading and the like. It’s not just capable; the suspension system is sufficiently insulated to ensure long periods of rough, off-road sessions without overly tiring or discomforting the occupants. That’s not always the case with some 4x4s, I could mention. Frankly, I would take this one on Safari!

In addition, the strong stability and flexible and refined power delivery ensures that it is not just a ‘shed’ on the road. And the drive system can be switched to just rear-wheel drive for effortless, high speed cruising on motorway journeys – all with remarkably low noise levels.

I had to do a lot of back country lane driving in the Shogun and it soon became apparent that, size for size, this large vehicle drives very tidily. The controls feel light yet responsive and the turning circle is much tighter and tidier than I envisaged.

There’s bags of space for five occupants with their luggage, and another two occupants – ideally of shorter stature – in the easy fold-up, third row seating. However, this allows less luggage space. Five occupants should enjoy a comfortable lifestyle while the other two could just be grateful for the ride. Roof rails give further load potential and, of course, the seats split/fold for various people/load permutations.

There really is a heck of a lot to this Shogun. The performance DNA is proven. The lifestyle it provides has never been better, and if anything, the highly rated safety protection is even superior – police forces are regular users.

Sit in the Shogun’s comfortable, heated driving seat, that has plenty of adjustment; check out the impressive, but not daunting, dashboard; and fire up the willing engine to start a motoring adventure.

Occasionally there are some genuine discounts to be snapped up. Compare the prices of like-for-like rivals, if you can find them, and the message is clear. Nearly 3 million Shogun owners worldwide can’t be wrong!