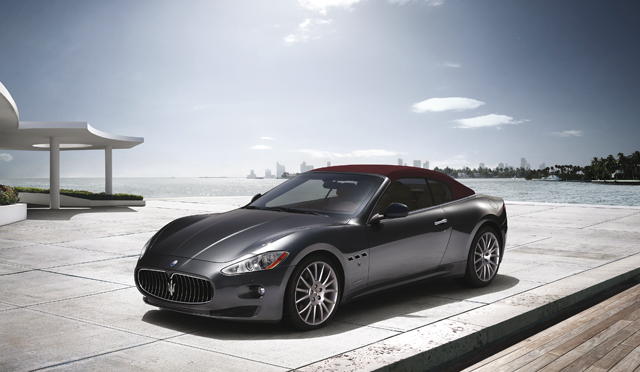 Words by:
Tim Barnes-Clay Featured in:
May 2012
Share Article

Some say that cars are nothing special – they’re only for getting you from A to B. That’s true in a way, but that’s like saying any old home will do as long as
there’s a roof over your head.
The Maserati GranCabrio is definitley something different – and special. Getting behind its wheel for a week is like moving from your bungalow in Birmingham to a villa in Valencia for seven days.

Looks wise, the Italian sports car’s headlights blend perfectly into the contours of the nose section, while at the centre of its oval grille is Maserati’s legendary Trident symbol in chrome. The rear end of the GranCabrio emphasises its high-tech character, with triangular taillights that use ninety-six LEDs to ensure maximum night-time visibility, and a wide rear valence is framed at the sides by two pairs of large chrome exhaust tailpipes. The car is then finished off by impressive twenty-inch Trident design alloy wheels which fit tightly into the wheel arches, creating a powerful stance.

Inside, the GranCabrio boasts a combination of elegance and sportiness. All the materials are in leather and wood and the driver’s controls are located to give a feeling of total command. The major dynamic functions are controlled by switches on the driver’s side, while the most commonly used multimedia controls can be operated via buttons on the steering wheel.

One of the best things about the GranCabrio is that it is a four-seater, which allows you and three others (admittedly, the two passengers in the back have to be very small) to enjoy the experience of driving with the top down. The roof can be opened in just twenty-eight seconds and it puts on show all of the car’s interior beauty.

Of course, the Maserati sounds as good as you might expect. Better, in fact. That’s because, controlled by pneumatic valves, the GranCabrio’s exhaust system has two distinct characters – discreet and inspiring. In ‘Normal’ mode the valves are closed to ensure a low rumble. However, pressing the ‘Sport’ button not only changes the car’s performance and handling but also opens the exhaust valves, enabling the engine to deliver maximum power with a smile-inducing growl.

At the heart of all this throbs the most powerful of the Italian car maker’s engines: the glorious 4.7-litre V8, delivering 434 bhp. It means the car can sprint from 0-62 mph in just 5.3 seconds and will go on to a top speed of 175 mph.

The Maserati GranCabrio is indeed a car to behold. Yes, it will get you from A to B like any other car. But, believe me, you won’t want to stop at B once you get in the driver’s seat, drop the roof, gun the engine and hear the crackling roar of the V8.