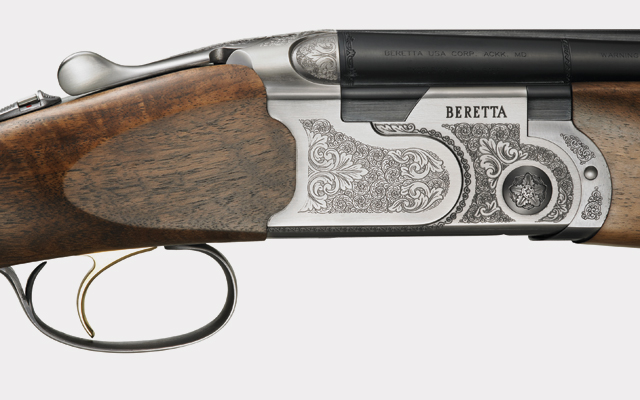 April arrives and there are already hints of summer, but there are many who are still talking about the success of the British Shooting Show which was held at the end of February. There are a great number of people out there who are into shooting for sport in one form or another. And there is still room for more.
NEW SHOOTING VENTURE
If you have ever wondered where you can buy that extra something that will improve your shooting, or if you are a newcomer and want help in buying the right equipment at the right price, then a new shooting venture in the county could be the answer.

Denise Popple and Penny Burton are the ladies who have launched Wolds Target Accessories, as Denise explained: “We feel that our business is different to others in this area, as there are shooting equipment stockists mainly for hunting, farming and so on but there are none who specialise in target shooting equipment, particularly for prone in our area. Lincolnshire is a very rural county and has a large number of .22 rifle target shooters and shooting clubs.

“As two lady shooters we experienced the lack of facilities near to us, particularly for prone shooters and ladies. The nearest stockists of shooting equipment being 180 miles away made it difficult to view and try on equipment prior to purchasing it. Last summer we both needed jackets; we travelled the 360-mile round trip and came back with one jacket for me, bearing in mind that we had communicated with the supply company weeks in advance and were assured they had the goods we wished to purchase. The customer service was appalling, not even being offered a drink.”

On the way home Denise commented, ‘We could do better than that’ hence the development of the business.

“We were both in full-time employment,” Denise continued, “so the time spent on the idea has been limited; we made a decision to book the shooting show and took it from there. We have now been to the show and have gained an enormous interest from the visitors, shooting clubs and other businesses. We have also got the main shooting equipment suppliers on board – these being based in Finland, Switzerland and Germany. We are still in the process of extending our suppliers to ensure that we can offer .22 rifle accessories and air rifle equipment.”

Denise shot from an early age with her brother and dad; while she was in the RAF she was awarded ‘Marksman’. Denise moved to Market Rasen in 2008 and joined the local Small Bore Rifle Club where she met Penny. Penny started shooting in 2007 and has subsequently progressed to shooting prone at county level. She will be a volunteer at the 2012 Paralympics with the shooting team.

“From 22nd February, our employment status changed,” said Denise. “I made the decision to resign from my job to concentrate on the business and Penny has started a Master’s degree.

“At present we sell prone shooting jackets, gloves, slings, bolt protectors, hand stops, ball knobs, scoring gauges, shooting under garments, accessory boxes, shooting caps and headbands, mats, kneeling rolls, care cloths and oils, breach flags, sight accessories, ear defenders, stop watches and can supply other items on request. This list covers only a very few of the items that are involved with the sport. We are not stocking ammunition or firearms.

“We are dedicated to providing a first-class product and personal service to our customers and would like to establish a reputation within the shooting world.”

CHAMPIONS OFF TO A FLYING START
The Lincolnshire Clay Pigeon Shooting Championships got off to a flying start in March, with Gary Taylor winning the Olympic Skeet title and the Olympic Trap titles going to experienced shooter, John Winn. Previous winner, Alison Dupree took the Ladies title and talented Jack Wilkinson continued where he left off in 2011, winning the Junior title. There is a long season ahead but the gauntlet has been thrown down.

JOIN A PAL AND BE A WINNER
The British Association for Shooting and Conservation, better known to one and all as BASC, has a great new scheme which could win both of you a brilliant Browning B525 Hunter Classic. If you introduce a new member both of you will be entered into the prize draw and if successful each will win one of these great classics, worth about £1,555 each. Take a look at www.basc.org.uk for more details.

ADULT SHOTS DAY EVENT AT RISEHOLME
Adults in Lincolnshire will have the chance to try fly fishing, archery and clay shooting, as well as other countryside activities, at a special event being held at Riseholme College in May.

The British Association for Shooting and Conservation (BASC), in association with Lincolnshire Active Community Network, has organised an ‘Adult Shots’ day for men and women over seventeen years of age, to provide education and training in shooting and country sports.

This is a ‘hands on’ day where all individuals actively participate in each of the disciplines under the tuition and guidance of experienced coaches.

Dave Carter, facilities manager at Lincolnshire Active Community Network, said: “We have been very lucky to continue to get the support from BASC to hold this event; they were very successful last year. The Shots Day gives people access to a hobby which they may not normally come across.”

Lincolnshire Police Firearms section will be attending on the day to give advice and answer any questions from participants in relation to the legal side of the sport.

Helen Wilkie, Lincolnshire Police Firearms manager, said: “I am pleased to see the programme involves safety advice in respect of shotguns and air weapons. With Lincolnshire being a rural county there are approximately 19,500 firearm/shotgun certificate holders. This event is an ideal way to introduce people to the sport, whilst at the same time immediately identifying the safety factors involved.”

You do not have to be a member of BASC to participate and all levels of experience are catered for.