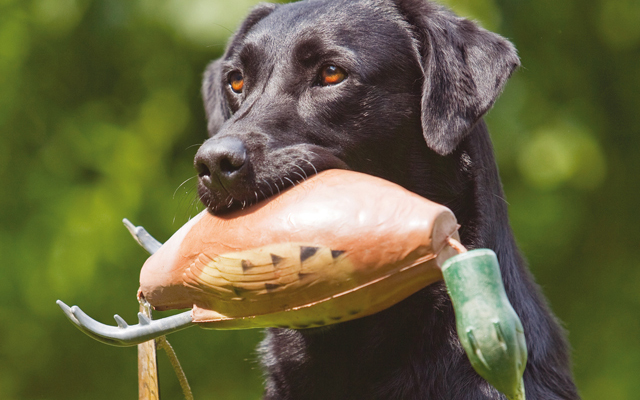 The Gunroom provides the best platform for all shooting pursuits – Send us your news on editorial@lincolnshirelife.co.uk
NOVICE WORKING TEST
Instead of the blizzard of last year’s novice working test, we were treated to a dry and tolerably mild day on Sunday 3rd March, so we were able to take full advantage of this superb ground. We thank Mr and Mrs J Milligan-Manby for allowing us to hold our test at Thorganby. We also thank Chandlers of Horncastle for sponsoring the event.

Our chief stewards, Sue Lowe and Martin Eveleigh, had set a series of interesting tests mostly linked by the common theme of crossing water boundaries.

The four morning tests were all double retrieves.

The scene for test one was a wooded hillside where two marks were thrown after shots. The gundogs had to cross a muddy stream before picking the dummies in the order in which they were thrown.

For test two, a fast running brook had to be negotiated before going through a gap in the hedge that hid the fall of the mark. The dogs then had to return to pick a blind put out in the same place as the mark.

Test three was a water retrieve. Handlers and dogs started on the ‘inside’ of the horseshoe shaped lake, about thirty yards from the water’s edge. Two dummies were thrown – one into the water and the other onto the far bank. The one on the bank had to be collected first, followed by the one in the water.

Just by way of a change, no water was involved in test four. The peg was positioned in the floor of a valley, fifty yards from a wooded area on the slope. A blind was already out sixty yards directly in front of the peg, just to the right of the wood. A mark was thrown onto the valley side level with the blind on the upwind side. The mark had to be collected first, then the blind.

Our four judges were Margaret Pearce, Malcolm Smith, Anita Beal and Will Hales. They did an excellent job, putting handlers at ease and allowing dogs a sensible time to succeed. They chose twelve of the thirty-nine dogs on the card to go through to the afternoon tests.

Test five was a picking up exercise. Two shots were fired into a wooded area at the top of a slope. The dogs had to cross a deep stream twenty yards away before running fifty yards up the bare valley side to pick two of the five dummies out in the wood.

The final test was a two-dog walk up. A mark was thrown into a wood beyond a ten-yard stream and a second was tossed into a dip in a grassy field. The first dog had to jump a fence into the field and the second fetched the mark in the wood. The dogs and handlers changed places and the test was repeated.

The six tests produced first and second, but a run-off was needed to separate third and fourth.

All in all it was a brilliant day and we thank the judges, the chief stewards and our superb helpers for making it so enjoyable.

GUNS FOR INVESTMENT
As the financial year is now coming to a close people are looking to diversify their portfolio, and the one question I probably get asked most often in the shop is: Are best English guns a good investment?

The reply to this is threefold: Firstly, I would always say that the main reason for the purchase of a best gun needs to be the enjoyment of using the gun, which is obviously part of the investment. Secondly, it needs to be a gun that you appreciate with the hand finish and craftsmanship. And thirdly that the gun is sound mechanically and that the barrels are in good order.

If I look over the past thirty years of best English guns that we have sold, some have gone out of fashion and some have come into fashion, but the three top names have always held and increased their money, namely Purdey, Holland & Holland and Boss. The returns on these have varied with modern guns increasing in value the most, and also the zenith period of gunmaking in the 1930s increasing well.

To give an example, a pair of 1930s Purdeys we sold thirty years ago for £20,000 would now be retailing in the region of £50,000, which is a very nice increase and also thirty years of enjoyment using the gun in the field.

A particular gun we have in stock at the moment which would give you a similar idea on investment is a Purdey made in 1970 with extra finish with bold scroll all over. The gun is 28/2 ½” original barrels, complete in original case, in excellent condition throughout. This gun new in the early 1970s would have been £1,500, and now we are retailing this gun at £32,500. This gives a slight bias on the increase as during the 1970s there was roaring inflation and Purdeys could not finish the guns for the money.

But this again shows that these guns are a good alternative investment to add to one’s portfolio.