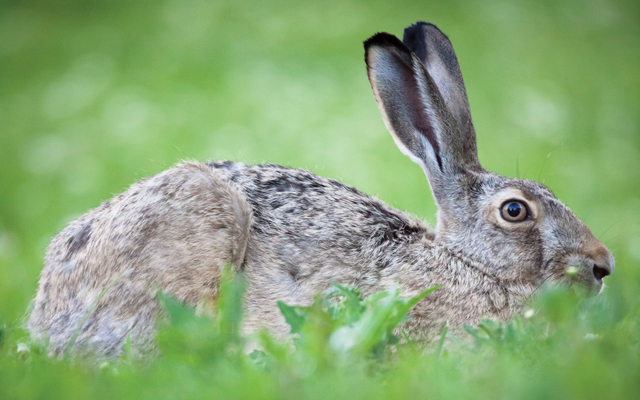 FROM WHERE I’M STANDING
The daffodils are all out so it must be spring. This time of year always fills me with joy and inspiration; with the days lengthening and the hedgerows greening up, I know that the best is yet to come in terms of what our countryside has to offer.

I know it’s a bit early but some of my planned shooting days for next season are already going into the diary.

Why so early? Well for syndicate shoots and the more commercial estates it is vital that they know the level of interest for the coming season, in order to put measures in place to meet the demand at the right time. This also means that, as a syndicate member, I have to start stumping up some of my ‘hard earned’ in order that I might spread the cost a little and that organisers get some cash in to help with early expenditure.

Those of us who choose to spend our spare money on a few or as many sporting days as time and money will allow get a great deal of satisfaction in knowing that some of that cash is going directly into wildlife management and conservation, because what benefits the pheasant and the partridge as well as the grouse also provides ideal conditions for so many other birds and mammals – whether through habitat creation, predator control or winter feeding, all other wildlife is enhanced.

If proof were needed, a recent survey by the Game and Wildlife Conservation Trust and published in Birds in Wales, concluded that when grouse shooting ceased on Berwyn Moor and gamekeepers no longer controlled the habitat, wader populations declined catastrophically with localised extinction of the lapwing. In addition the golden plover and curlew declined by ninety per cent and seventy-nine per cent respectively.

A new project on this moor to reinstate predator control and improve habitat quality is thankfully underway with funding from the Welsh government’s Nature Fund. Hopefully in the not-too-distant future the plaintive call of the curlew will return.

In my part of Lincolnshire the brown hare is a common sight. It has been suggested that farming practices through the 1970s and 80s contributed to the hare’s decline. I have no doubt this was true, but farming is now very wildlife friendly and the hare’s fortunes are on the up, with everything from field margins and game strips to bird mixes and beetle banks all contributing to the rich and varied tapestry that is benefiting all wild creatures including the wonderful brown hare.

With a general election soon I want to know how my parliamentary candidates view my pastimes, namely hunting, shooting and fishing, because it is not always clear cut. Although individual MPs can often have little impact on policy when laws are being implemented, which will affect what we do and how we do it, if you want to know where they stand it is worth sending them an email and hopefully they will reply honestly.

ENTRIES NOW OPEN FOR THE ANNUAL COUNTRYSIDE CLAY SHOOT
Organisations, businesses and individuals are being encouraged to enter teams for the 2015 Countryside Clay Shoot, organised by the British Association for Shooting and Conservation (BASC) and the CLA Game Fair.

The annual charity clay shoot, which is being held on Six Mile Bottom estate in Cambridgeshire on Saturday 23rd May, will raise money for the Gamekeepers’ Welfare Trust (GWT) and the Royal Agricultural Benevolent Institution (RABI).

Teams of four will compete across six stands with a mix of simulated game targets. Entry costs £600 per team, which is £150 per person and will include hospitality.

The winning team will receive the Hugh van Cutsem Challenge Cup, dedicated to the memory of the keen shot and countryman, which will be presented by Emilie van Cutsem.

Steve Bloomfield, BASC England director, said: “This popular annual event is a way for everyone who shoots to support the two charities and raise funds. I would urge you to enter a team at the earliest opportunity.”

Tony Wall, director of the CLA Game Fair, added: “We are thrilled to be hosting this esteemed event alongside BASC for very worthwhile causes. Having had a whole game shooting season to get your eye in, the competition should be fierce.”

Twenty-five teams took part in the 2014 event, which was won by the National Gamekeepers’ Organisation and included teams from BASC, the CLA, the Countryside Alliance, The Angling Trust and the National Farmers’ Union.

Places are limited so advance booking is essential.

THE ENGRAVER’S ART
We are constantly being told that all the old skills are dying out. The engraver’s art really had some wonderful talents, like Harry Kell working on Woodward or Blanch, and the Summers Family on Boss guns.

Some of the notes from Mr Robertson, the owner of Boss, to Mr Summers demanding that he speed up his engraving to aid delivery are verging on being very rude – bearing in mind he was allowing two to three days per gun and paying £2 10 shillings for the work, 110 years ago.

All the famous guns up for auction recently tended to be engraved in the House Style, like Purdey with its typical Rose and Scroll with arrow cocking indicators showing whether the gun was ready to fire or not. Interestingly the other best makers used a line in 18ct gold for the same purpose. The names of many of the engravers have been lost, as they did not sign their work. Today, however, most sign discreetly within the trigger guard, some owners unaware of it.

Lot 1530 – a 28 Bore by Piotti, engraved by Pedretti. The description says it all: ‘The right lockplate meticulously engraved with a fine brace of woodcock on a forest floor amid oak leaves and ferns. The left lockplate has an extreme closeup of a woodcock surrounded by bramble.’ The gun is all over engraved to an exceptional degree. Some 800 hours were needed for this lot alone, £60–80,000.

Lot 1601 – Berretta 12 Bore engraved for the 1984 Olympiad, showing the Goddess Nike on the underside, £4,500–£5,000 signed G Timpini.
Abbiatico and Salvinelli employed Badilini to engrave fine game scenes of ducks in flight . The trigger plate is also signed on their Excalibur Range. Bettinsoli is also used to great effect. Lot 1620.

Closer to home Charles Hellis have used Dave Tallett to engrave a 28 Bore over and under in traditional Rose and Scroll to great effect. He is available to do heel and toe plates, or whatever you may require.

Lot 1621 – Holland and Holland Casbard engraved 12 Bore over and under dated 1994 and signed. The lockplates are carved in relief with flowing acantums scroll work on a matted background including a lone cock pheasant in flight £20–30,000.

Holloway and Naughton are another famous modern maker. A pair of guns ordered in 2002 and delivered in 2005 are highly engraved and signed by Delahaut. The actions are carved in high relief with bold Celtic strapwork including stylised birds’ heads and talons, plus forends decorated en-suite. I don’t know Mr Delahaut but these guns remind me of the old Scottish traditions of gun engraving.

Engraving has become very personalised and certainly expensive but even more popular than house styles. In the early 1900s perhaps just the fencing would have been different, but now engraving varies from decorative game birds, and views of ancient Greece to occasional scenes of a prurient nature.

I am delighted to value any gun in Lincolnshire and can consign to our Auctions. Simon Grantham 07860 300055.