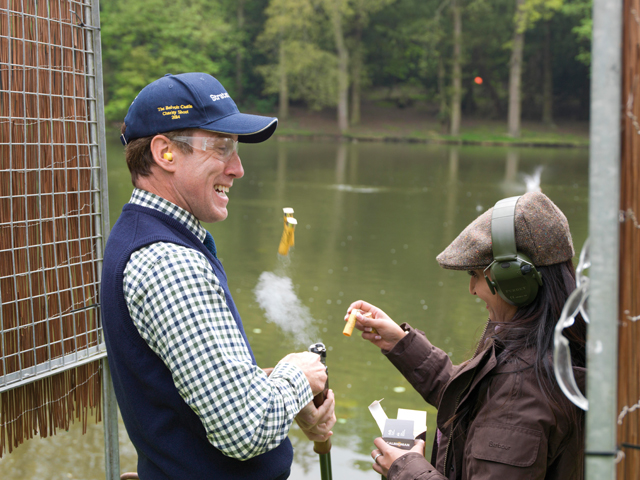 The Gunroom provides the best platform for all shooting pursuits – Send us your news on editorial@lincolnshirelife.co.uk
THE BELVOIR CASTLE ANNUAL CHARITY CLAY SHOOT
The extensive grounds of the Belvoir Castle Estate, on our county’s western border, was the venue for the annual charity clay shoot. The event raises funds for the Belvoir Castle Cricket Trust, a registered charity focused on getting young people from rural, town and inner city primary schools – including those with special needs – active and engaged in the countryside.

In the five years since the trust was formed, it has involved over 8,000 youngsters and delivered more than 34,000 hours of active sport and outdoor education. For many youngsters this is their first taste of the countryside and what it has to offer in terms of work and recreation.

The day started with a briefing over breakfast, in the upstairs Regents Gallery of the castle, which is home to the Duke and Duchess of Rutland. The twenty-three teams of corporate competitors had converged from all over the UK and abroad to support this worthy cause. Based on five classic drives, the guns would tackle everything from high pheasants to driven grouse, partridges and pigeons. During the course of the event, much of the 15,000-acre estate was utilised.

Among those competing was Test cricket legend, Graeme Swann as well as Anton du Beke from Strictly Come Dancing. The shooting was fast and furious but blessed with fine weather and wonderful surroundings. The shoot was a huge success with over £30,000 raised on the day. An auction of ‘Things that money can’t buy’ contributed in large part to the final sum. Lots included a day with the Red Arrows, Centre Court tickets at Wimbledon, two tickets to see Strictly Come Dancing Live as a guest of Anton du Beke, as well as dove shooting in Argentina and duck shooting at Belvoir. Bidding was brisk with guests prepared to dig deep into their pockets for such a worthy cause. The day closed with a personal thank you from Her Grace, the Duchess of Rutland to all those who had helped to make the day a great success including sponsors Chandlers, Stratstone Land Rover, Fisher German chartered surveyors, and Majestic wines. The winning team were The Empingham estate consisting of David Padley, Phil Burtt, Stephen Bett and Wally French.

SHOOTING’S VALUE TO EAST MIDLANDS MUST BE ACKNOWLEDGED BY POLICYMAKERS, SAYS CLA
Shooting delivers economic growth and its value must not be underestimated by policymakers if the countryside is going to flourish, the CLA has said.

The Association said a new report from Cambridge based Public and Corporate Economic Consultants (PACEC) – The Value of Shooting – contains striking figures showing just how much the rural economy and environment relies on shooting.

According to the independent research, which the CLA supported as a partner organisation, shooting is worth £2 billion a year Gross Value Added (GVA) to the UK economy and supports the equivalent of 74,000 full-time jobs.

IN THE FIELD…
By now the harvest will be well under way. This signals to the shooting man or woman that the new shooting season is fast approaching. With the fields starting to be cleared, we can start to see how well or not the wild game has fared.

Up until now, with crops standing, it will have been very difficult to see game on the ground and to gauge the success of the breeding season in terms of the wild stock.

Of course nowadays very few shoots will rely solely on wild birds to provide their sport. This is for the simple reason that, as shooting becomes more popular, more pressure is put on the game on the ground. This is why almost all shoots will rear and release numbers of both pheasants and partridges, to ensure that there are sufficient birds to provide the required amount of sport throughout the season.

To those who do not take part in shooting sports this might appear a little mercenary, but it is merely good management and good planning; in order to ensure that by the end of the season their has been sufficient sport without putting too much pressure on the native wild birds.

I am occasionally asked by well-meaning non-shooting friends and others how I justify not just the shooting of wild game birds but the rearing and releasing of birds for no other purpose than to shoot them. From my perspective it is a very easy question to answer: the contribution that country sports in general makes to the wellbeing of our countryside in terms of conservation and biodiversity is huge.

On the conservation side alone, much of the landscape as we know it is hugely influenced by the fact that our ancestors and our land managers today all realised that much of the effort they put into creating the ideal game habitat also benefited a huge range of other species.

Our present day farmers and gamekeepers are now much better informed and tolerant. The days of anything with a hooked beak being eliminated are thankfully long gone. Supporters of country sports now accept that everything has a part to play in making our countryside as we would want it to be, and that it has a place for all wildlife.

Of course, this does not mean that it can just be left to get on with it. We live in a totally managed landscape and that includes its wildlife. Sometimes we have to control one species that is abundant in order to help another that is diminishing.

The RSPB now admits that it controls foxes on most of its reserves, shooting over 200 last year, and as we saw on a recent edition of Springwatch, badgers can eat the chicks of the endangered avocet just as easily as anything else. I think it was a bit disingenuous of presenter Chris Packham to suggest that this was a one-off rogue animal, and that badgers do not normally eat chicks and eggs. It is, in fact, perfectly normal behavior, as the badger is an omnivore and an opportunist, so will partake of almost anything that comes its way.

The summer months can sometimes mean that the game shooter does not get as much practice as he would like. Years ago, the village clay shoot was always a highlight of the summer calendar; a chance to meet up with friends for a bit of friendly rivalry, as well as a bit of practice. In recent years this summer ritual has all but disappeared, killed off by the dreaded ‘Elf-N-Safety’.

There was a time in our county, particularly during the 1970s and 80s when we were spoiled for choice every weekend, as we would go from village to village chasing modest cash prizes. It was frequently at these shoots that budding talent would emerge; most of our top competition shooters probably started their shooting careers at a village clay shoot. I mention this because I recently attended a garden fete with, you guessed it, a small clay shoot. Taking my gun with me, I had a go and it brought back memories of days gone by. I chanced upon a budding talent in a young man called Angus Bean, from Marton near Gainsborough. Aged only twelve he was shooting under the guidance of his father John and showed a level of skill that belied his years, ultimately winning the event – he could be a future champion in the making.

Shooting at the highest level in competition takes skill, dedication and lots of practice and not everyone makes it. Angus is inspired by the likes of Peter Wilson, our Olympic double trap gold medal winner. I’m sure we will be hearing of Angus again in the future and I wish him every success.