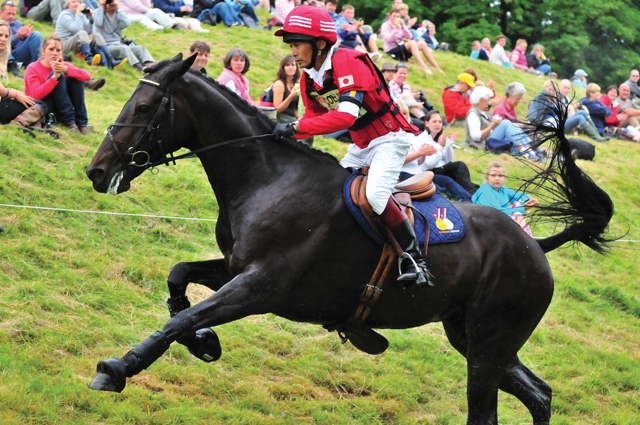 December has to be the most exciting of the winter months and not just for the obvious reasons. There are still many events going on, from Boxing Day hunts to going to, or watching on television, the fantastic Olympia Show Jumping. Enjoy!
LOCAL RIDER QUALIFIES FOR OLYMPICS
Japanese rider Takeaki Tsuchiya from Stamford, Lincolnshire was thrilled to hear the news that he qualified for the 2012 Olympics while competing at Blenheim Horse Trials. His qualifying result means that Japan will be represented at the Olympic Games; it is hoped Takeaki will be joining them along with the support of his home town in Lincolnshire.

Takeaki Tsuchiya came to England in 1993, to pursue a riding career. He has trained with some of the world’s finest riders and is a big part of the Japanese national riding squad. Now living and working in a picturesque village near Stamford with his wife Natalie, he specialises in producing for sale and sourcing talented young horses for eventing and dressage.

Takeaki said: “Natalie and I are so happy with this result; it is a big boost for us and our local business. We are all so excited. I have a great team behind me and we were delighted with the results at Blenheim.”

Takeaki and his magnificent horse Jackabee have all the support from the locals, his wife and his sponsors at EquiFeast. A combined effort of training and finding the right supplements for Jackabee have really paid off.

Takeaki’s sponsors at EquiFeast are over the moon with his results and said:

“We are delighted for Takeaki and the Japanese team. Their performance at Blenheim gives them a well-deserved place in the 2012 Olympics. Having supported Takeaki for almost six years and helping him improve his horse’s concentration and behaviour with our new chelated calcium calmer, we are sure Takeaki and his horse Jackabee will sail through to next year’s games and we couldn’t be happier.”

AMY’S A CHAMPION
What a great year it has been for Amy Woodhead who conquered the field at Sheepgate’s recent Under-25s national dressage championships.

The nineteen-year-old Grimsby rider led the way with her fourteen-year-old stallion Pardon in the young rider classes at the equestrian venue in Leverton, near Boston.

Her success has seen her named as Under-21 national champion.

Amy, who narrowly missed out on a place in the British team for the European Championships, insists she wasn’t shocked by the superb performance of her horse.

“I was expecting him to do well because we have had success all year,” she said. “He has done really well and we have finished in the top five, at least, in every single event we have been at.”

Furthermore, after only four months and two competitions with her new horse Luke, they have been selected as second reserve for the British Junior Team competing at the European Championships.

ROXANNE’S HUNGRY FOR MORE
It’s been a great year for Roxanne Hennebury and now she cannot wait for more of the same in 2012. The experience of competing at an event featuring more than 1,400 others has left showjumper Roxanne determined to do even better next year.

As we reported earlier, the twenty-three-year-old qualified for Scope – the annual British Showjumping Festival – and competed alongside 200 others.

Roxanne, from Humberston, did not even expect to reach the prestigious festival as she had only four months practicing with horse Brighton Boy in the discipline at the time she qualified.

She had previously performed dressage, and many deemed her horse ‘unrideable’ when she first met him a year ago.

However, after experiencing Scope for the first time, and enjoying relative success despite not placing in four events, Hennebery now has her sights set even higher.

She said: “It was a fantastic experience – if someone would have said to me a year ago I would be at Scope with Brighton Boy one year later, I would have laughed because of his issues when he first came to me.”

Roxanne is appealing for sponsorship to enable her to compete at more top quality events, offering good exposure.

SPOTLIGHT ON LAUGHTON MANOR EQUESTRIAN CENTRE
We have many fine equestrian centres in this great county but Laughton Manor is right up there among them. Their website will tell you that their great facilities include both indoor and outdoor arenas with good spectator facilities as well as a restaurant and full livery in about forty stables. The centre has ninety acres of pasture and easy access to off-road hacking.

Needless to say the venue always has a diary of all kinds of events but it is also available for hire and centre manager Rob Reeve explained that there is an ongoing improvement programme.

Laughton Manor Equestrian Centre can be found at Folkingham near Sleaford (NG34 0HB) so why not go along and see for yourself or give them a ring on 01529 497760.

WELL DONE CAISTOR!
Belated congratulations to Caistor Grammar School pupils who hope that in 2012 they will ride in more high-profile equestrian events after finishing twelfth in a national competition.

The team gained a twelfth-place finish out of a field of some seventy teams in the National Schools Equestrian Association’s National Hickstead Show Jumping Championships in Sussex.

Amy Bowring has been in fine form, having finished fourth in two events at the Arena UK Ultimate Show Jumping Championships.

Amy said: “The team ended up tied with sixteen others and we had to then do a jump off for positions from eighth to twelfth, which was quite tense. I was elected to represent the team and managed to produce another clear and we finished twelfth.

“Tiffany also produced a fantastic clear round for the second team. They finished just outside the jump off, but it was still a great result.

“It was an exciting result for a new team in such a big field.”

On her recent individual form, Bowring said: “It was only my second competition on my new horse, Lucy May, and we have high hopes for future events.”

CHRISTMAS IS COMING
Christmas is just around the corner and the festive preparations are getting into full swing, even though the shops have been displaying the decorations for months and I even heard Christmas music on 3rd November in one shop! Let’s hope the weather offers riders a better situation than last year when the extreme drop in temperature led to continuous frost and icy roads before the snow fell, well before the festivities, putting an immediate stop to many equestrian shows. As another year draws to a close it is amazing where the time goes; it hardly seems possible that a full year has passed since last Christmas and here we are again.

So what have you achieved with your horses and ponies this year? Those New Year’s Resolutions promised nearly twelve months ago, how long did they last?

I’m sure those Christmas lists are made and our equines feature strongly with requests for new rugs and accessories, perhaps a new bridle or saddle? Not forgetting the compulsory request for more socks this Christmas – you can guarantee you will get some even if you don’t ask for them!

Most riders enjoy some time off from work at Christmas, which means the horses get some extra work, weather permitting; just remember not to overdo it if your horse’s workload has been less consistent until that time. Joining the Hunt on Boxing Day might not be the best idea if you have had little preparation. So enjoy your horses this Christmas time and remember not to overdo it yourself with the festive celebrations and abundance of food and drink that go with it.

I will join the list of frantic mums preparing the Christmas lunch again this year so here’s to a very Merry Christmas to everyone and wishing you all the very best for 2012.