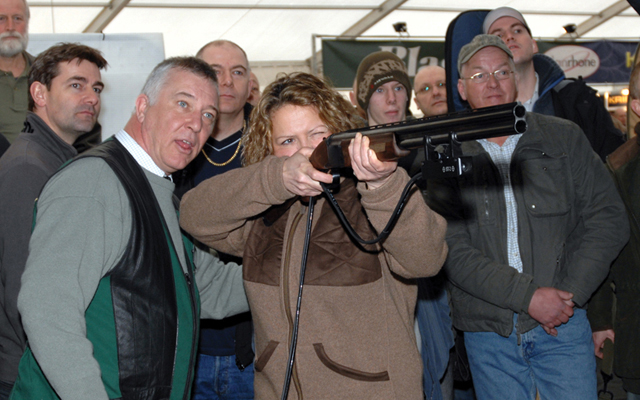 It did not take long for February to arrive and suddenly the shooting fixture list is starting to change. For some it is time to take up shooting and seasoned campaigners will forgive us if we give a couple of pointers here to newcomers. We are also reviewing the various seasons for game shooting and taking a look at one of our county’s top clubs. Novice or experienced shooter – welcome to the Gun Room.
GETTING STARTED
One of the the great points about taking up shooting is that you don’t have to immediately rush out and spend a fortune on equipment. Most shooting clubs have something you can try and will advise until you decide to get completely involved in the sport. Nobody is going to give you wrong information because they are all enthusiasts and want to share their sport with you.

How do you find a club? You will find clubs mentioned on these pages but in addition to that you can walk into any local gunsmith’s shop. Just go in and explain that you are interested, and ask about the location of the nearest shooting ground. They will also be keen to help you. Of course you can also visit the sites of the sport’s governing bodies. The Lincolnshire Clay Pigeon Shooting Association website contains all sorts of information including contact details of all affiliated clubs. Take a look at www.cpsa.co.uk/lincolnshire.

Some would-be shooters worry about insurances and firearms licences. Well, odd though it might seem. insurance whilst shooting is not compulsory. It is however, common sense to have public liability cover. Many shooting clubs and other organisations include insurance among their membership benefits.

As for shotgun certificates and firearms licenses, it is simply a case of applying to the police. A shotgun certificate covers smooth-bore guns with barrels longer than 24” which either do not have a magazine or a permanently fixed magazine which cannot hold more than two cartridges.

Applicants do not have to prove they have a good reason for acquiring a shotgun, but the police can refuse if they think the reason is not genuine. Completed forms must be countersigned by a person of some standing in the community but not a relative. You could ask your employer, a professional person, a minister of religion, civil servant, bank officer or someone whose name appears in a public work of reference. Countersignatures must be UK residents of good character who have known you for at least two years.

The police will visit you to interview you about the application and to give advice about the security measures you will need to store your shotgun. Once you have a shotgun certificate it is valid for five years and there is no limit to the number of shotguns you can acquire, providing you store them securely when not in use. The police cannot put any condition on a shotgun certificate restricting the use of the shotguns to which it relates.

Similarly, any UK resident can apply to the police for a firearm certificate. This covers rifles and shotguns with magazines which hold more than two cartridges.

Applicants must give a good reason for every firearm they wish to acquire. The police will want evidence that you have permission to shoot on land. There is no legal requirement to provide written permission, but this may speed up the process if you can.

You must supply the names of two referees, who must be resident in the UK, not members of your immediate family, who are of good character and who have known you for at least two years. There is no legal requirement to pass any test or undertake any training prior to the grant of a firearm certificate.

Application and referee forms can be obtained from police stations or online. A Firearm Certificate is also valid for five years and a variation must be obtained before any firearm can be added to it. It will be issued subject to restrictive conditions.

There is a cost involved of course. The grant of either certificate is £50 and renewal is £40.

GET YOUR SIGHTS ON…
PINEWOOD SHOOTING GROUND
Here’s one club you are sure to like.

Pinewood Shooting Ground is set in one of the most picturesque parts of the Lincolnshire countryside, less than fifteen miles from the M180 at Blyton near Gainsborough. It provides an ideal venue for both beginners and professionals alike and is generally recognised as one of the best clay pigeon shoots in the county.

As well as being a fully police-approved shooting ground, Pinewood is also a Disabled-Friendly Shooting Ground and many of the England Disabled Shooting Team use the excellent facilities. Pinewood offers Corporate Days, stag and hen parties, individual and group tuition by arrangement.

For the experienced shooter it is worth noting that Pinewood have fully-automated Bowman Traps so the facilities are suitable for all standards of sportsman or woman. Club guns are available for those who do not take their own and as well as shotguns, Pinewood also has facilities for air rifles and even archery. The club house also caters for all tastes and requirements.

There is a lot more to Pinewood that we can feature so why not take a look at the club’s website on www.pinewoodsg.co.uk or phone 01427 638900 for more details.

After all, it is not everyone that can say they are shooting at Pinewood!

BRITISH FIELD TARGET ASSOCIATION (BFTA)
There are quite a few organisations involved in or affiliated to shooting so here on these pages we are going to try to explain who is who, starting this month with the British Field Target Association

The British Field Target Association is the governing body for the sport of field target shooting in Great Britain. The objects of the Association are:

The BFTA has nine regional bodies that actively promote and support field target and responsible target airgun shooting across the UK. Through the regional structure, the BFTA encourages a uniformed approach to target and shooting standards. There are currently sixty-nine affiliated clubs in the UK, and over 2200 members.

In addition to promoting greater participation in field target shooting at a ‘grass roots’ level, the BFTA also runs the national ‘Grand Prix’ series of competitions, which culminate in the end of season spectacular – The Showdown. The Grand Prix series events are held across the country, with each region usually hosting one of the nine rounds.

In order to shoot in a BFTA sanctioned event you must become a member of the Association, at which time you will be given a ‘grade’. This grade is based upon your performance over a six-month period, and ensures that competitors shoot against others of a similar ability.

The BFTA also organise several major open Championship events including the BFTA Championships, BFTA Masters and European Field Target Championships. The European Championships are held each year at the Midland Game Fair and is considered to be the world’s most competitive field target event.

SEND US YOUR NEWS
Have you got something to tell us? What’s the latest from your club or event? We want to hear from you and keep the county informed of what is going on in your area or your field of activity whether clay pigeon or another shooting sport, field sports or archery. Keep us posted on editorial@lincolnshirelife.co.uk