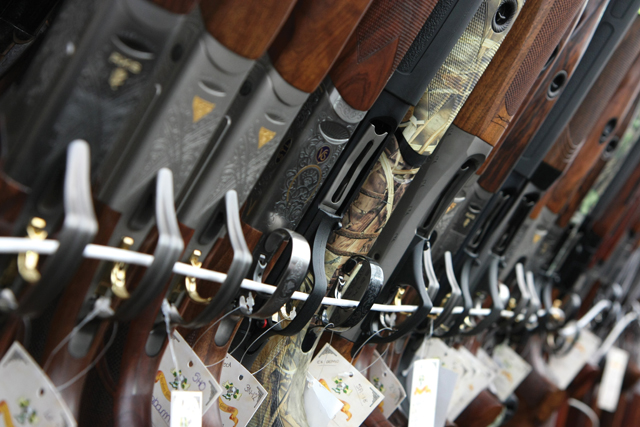 February is a special month in the shooting calendar, especially in this part of the world, since we have the massive British Shooting Show on our doorstep. It is a show which draws traders and visitors from all over Britain and even overseas, proving beyond a doubt what a hugely popular sport we have. Don’t miss it, there’s not another shooting and country show like it.
THE BRITISH SHOOTING SHOW 2012
‘Something for everyone’ is the whole concept of this amazing show, which will be held this February at its usual Newark Showground site. It is quite incredible to think that this is its fourth year because it is simply so huge and well organised; it seems to have been around for decades.

The British Shooting Show 2012 will be the most comprehensive yet with everything to interest the shooting enthusiast, including: gamekeeping hall, gundogs hall, English gunmaking craftsmen, classic and historic arms, knives and field cutlery, shooting associations, shooting magazine publishers, specialised clothing and outdoor wear, innovative accessories, a huge range of scopes and optics, clay coaching and competitions. There will also be ‘Taste of Game’ sampling and cooking demonstrations, and, for those who want to give shooting a try for the first time, there is a special ‘Get Started in Shooting’ information area in the new BASC Pavilion.

In all there are more than 160,000 square feet of shooting interests and the 2012 version is set to be the most informative and entertaining shooting show yet!
Many new features were added for 2011 and organisers have been working on even more for 2012, so surely this year the British Shooting Show can claim to be the ‘Greatest Shooting Show On Earth!’

The British Shooting Show just keeps on getting bigger and better. For more information please visit the show website at www.theshootingshow.co.uk.

AARON HEADING
Lincolnshire has a great number of Olympic hopefuls, some of them in shooting disciplines. One of them is Long Sutton’s Aaron Heading, who won gold in the men’s trap singles at the 2010 Commonwealth Games and believes he can set a new world record at London 2012.

The twenty-four-year-old county shooter says winning Olympic gold has been a long-term ambition and he is on the British Shooting shortlist to take part. However, that is only part of his dream.

“My aim is not just to win gold, but to set a new world record,” he said. “The day I realised it was an Olympic event it became the target, and when London won the bid: the Olympics it became the thing I wanted the most.”

Heading held his first shotgun certificate at the age of nine.

His mum, Lyn, who has travelled the world following her son, admits that to watch him competing at the London Olympics will be a very emotional experience.

“We want to be there of course, but if we have to we’ll pitch up and watch him on the big screen,” she said.

“It’s something he enjoys doing, so we are with him all the way.”

Aaron’s dad, John, believes that his son has time on his side and will go on to represent his country in future Olympics as well.

“At the moment he is number one in Great Britain and if he gets the chance to go to the Olympics that is the goal,” he said.

“I can see him going on to compete in the next three or four – this is just one step in the right direction, but there is still more to come even after this year.”

At the London 2012 Olympics, about 400 shooters will compete in the Games in fifteen medal events across pistol, rifle and shotgun shooting.

The Royal Artillery Barracks in Woolwich will be the venue for the event because of its long history with the sport, while the location will also host the Paralympic shooting competition and the Paralympic archery competition.

PROFESSIONAL CHOICE
Now that the season is over and a distant memory, and the good shots we managed to pull off are history and misses thankfully all a mystery with pigeon shooting and goose shooting coming to a close, a lot of country people tend to be at a loose end, and this is where the Newark British Shooting Show has appeared on the calendar in the last 3 years and is now probably one of the largest shooting shows, certainly in England if not in Europe.

For the shooting enthusiast and also for the people thinking about buying their first gun or taking up shooting, I can thoroughly recommend attending this show as a day out. It is all under cover with outside shooting displays as well, and places to try guns. There is everything there from the expensive over and unders to the quality classic English guns, everything for the pigeon and clay shooter, also a vast selection of air rifles.

When going to a show of this sort and thinking of buying a gun, always ask what the terms are ie: fitting and guarantee, etc, and if buying a classic gun ask for the bore measurements and thicknesses of the barrels before purchasing, to know that the gun will be a worthwhile investment and fit for purpose. This show does tend to get very busy and I would recommend either going early or visiting it late in the morning, after the initial rush is over.

Companies like ourselves will be there exhibiting all ranges of guns priced from £100.00 in side by side, to a classic Purdey at £10,000.00. You will also find gunsmiths there who will be able to discuss any problems you have with your own gun, as well as clay coaches to discuss guns with you.

I can thoroughly recommend this show as an enjoyable and rewarding day out.

AIM AT US
Here at Lincolnshire Life we are keen to support shooting sports of all sorts, so don’t forget to aim your news and events details to us and we’ll get them in everyone’s sights. Let’s help make 2012 a great shooting year for all.

Send your news to editorial@lincolnshirelife.co.uk