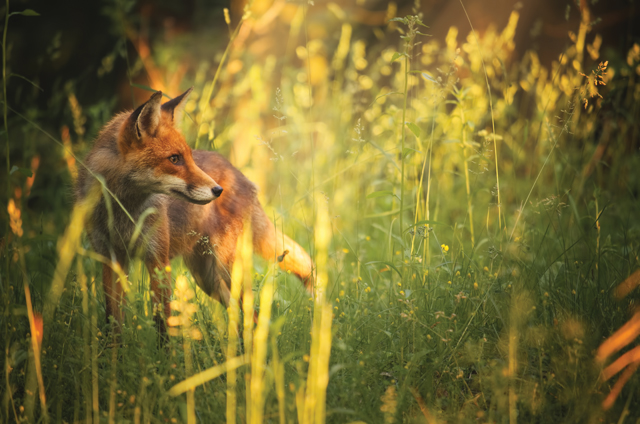 I know it’s a long way off but where cover crops have to be grown and birds reared, leaving it until the last minute is not an option. By now we are just starting to see the days beginning to lengthen a little and as I write this we are coming through what has been the wettest and probably the mildest winter on record, with virtually no frost. This is no bad thing for most of us but we are not out of the woods yet and a cold spell can come at any time. But with spring flowers such as snowdrops as well as daffodils and primulas all in bloom we can perhaps afford to be a little optimistic.
January and February are the months when, if you are out and about after dark, you might have heard what is described as a fox barking but is in fact more of a shrill screech. This call is probably as familiar to urban dwellers as it is to country folk.

Foxes are almost totally silent, except when calling for a mate between December and February. The vixen is only receptive for a few days and her chosen mate will follow her about day and night until mating takes place. Gestation is about fifty-two days, so cubs will be born around the first week in March. Despite being public enemy number one and a danger to anything that nests on the ground, I still get a thrill when I can catch one unawares and just watch him going about his business.

Pigeon control gets underway this month. With the shooting season over, many estates that have been off limits to us now open their doors. It normally starts with what is described as roost shooting; that is, shooting the birds in the woods as they come to roost for the night. Traditionally the first four Saturday afternoons in February will see as many woods as possible manned in order that the pigeons are kept on the move, carrying on until it is too dark to see. It may seem a bit mercenary but it is an effective way of keeping numbers of this avian pest under control. The windier the weather, the better it is for the shooter.

This year I have the opportunity to shoot from a high tower built up through the trees. I have not tried it before so I am looking forward to it with great anticipation. Also, my pal George and I will be getting out with the decoys as another very effective method of control, starting with chopped maize crops that have been used for game cover. This is nearly always a magical draw for the pigeons that have been struggling along all winter on berries and greenery such as rape.

I’ve shot pigeons for nearly fifty years and springtime still fills me with excitement and anticipation of the long days to come. Those of you who shoot pigeons will know the joy of a fresh wind on your face and the warming sun on your back as, having found a flight-line, pigeons tack across the fields into your decoy pattern.

Spring drilling will also be getting started anytime soon. It’s not the draw that it once was, as modern machinery is just so efficient at getting all the grain into the ground, but can still give you a shoot. You have to be quick, though, as any spilled corn will soon be gone. The key is to know your ground and liaise with the farmer so that you know what crop is going in where and when.

Coming up, and back by popular demand, is ‘An Evening for Shooting and Country Folk’ to be held at North Kyme Village Hall on Friday 26th February at 6.30pm. There will be a variety of local countryside traders as well as lots of like-minded people ready for a chinwag. There will be a bar and it costs just £2.50 to get in, with any profit going to charity. I missed it last year as I was abroad but I will definitely be there this time, so come along and bend my ear.

HOLT’S
The Father of English Gunmaking

Edward Newton 1692–1764 was born in South Wingfield, Derbyshire. He came to Grantham and was received as a foreigner in 1718, he compounded with a fee to admit him to the freedom of his craft as a gunsmith. Aged 26 he set up business on the Great North Road four doors down from the Angel. I’m sure this location contributed in part to his early success.

This was obviously a time of flintlocks and quality made them so much more reliable. Edward was innovative too, he designed a pistol where the steel swung away from the flint making the gun safer to reload. His many clients travelled past his shop to stay at the Angel, like the Duke of Athol or Marquis of Rockingham – they no doubt dropped into his workshop journeying between their respective homes and London.

Edward took on two apprentices, namely John Twigg and Robert Wogdon. They served their seven-year apprenticeship before moving to London to become makers of the finest quality duelling pistols. Examples of their beautifully balanced guns regularly appear at Holts Auctioneers.

He also took on Joseph Manton, born in 1766 in Grantham. The Manton name became synonymous with all that is best in gunmaking. He established the appearance and look of side by side sporting guns that we use today. He also improved the flintlock to ignite faster, so firing sooner than contemporary pieces.

Manton in due course took on two apprentices or journeymen, their names being James Purdey and Thomas Boss, still making ‘Best’ Guns today. Of course it carried on, many owners of William Evans Guns will have noticed it says “from Purdey’s” on the underside.