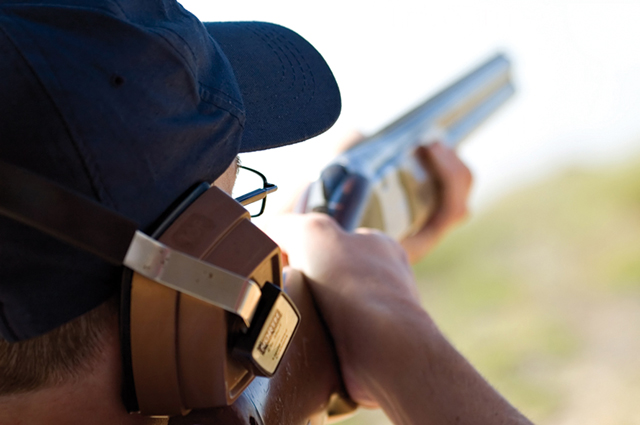 Plenty of interest in shooting and archery activities at the Lincolnshire Show and at Brocklesby so it could well be that our numbers are continuing to swell as more and more people of all ages discover the satisfaction of hitting the target!
SLEAFORD SMALL BORE RIFLE CLUB
Sleaford Small-Bore Rifle Club (SSBRC) is a long established club located in Sleaford with around twenty members that range from the ages of twelve to seventy years old. The members come from Sleaford and the surrounding area bringing a wide variety of backgrounds, from the farming community to archaeologists.

SSBRC is part of the National Small-Bore Rifle Association (NSRA), this is the governing body of our sport. The club is for use with small-bore rifles only. Small-bore rifles are defined as a calibre of .22 of an inch or smaller. The members shoot two main disciplines, these are target shooting and sporting rifle shooting. The club is open on a Tuesday and Friday night.

The Sleaford Small-Bore Rifle Club was founded in 1938 by a small group of local enthusiasts. The club’s main purpose and the wording in its original charitable status was to ‘provide target shooting tuition to His Majesty’s subjects in defence of the realm’. Originally called ‘Miniature Rifle Clubs’, the name was updated in the post war period to ‘Small-Bore’.

The club is proud to have the grandson of one of the founder members amongst the current membership, this means that there is an unbroken family membership from 1938 to date.

After renting for some years, the club acquired its Stevens Lane range in 1980. In 1985 the club embarked on a series of improvements to the rather primitive facilities, the club did not even have running water. There is now a twenty-five yard prone range with four firing points. A further range for standing and air weapons is currently under development. A functional club room with a small kitchen and the usual facilities, now includes running water!

The club has always had a presence at county level providing several members for the Lincolnshire team. Sleaford’s A Team shoots in the top tier of the county leagues and is a regular season champion.

Want to know more? Take a look at www.ssbrc.org.uk

LINCOLNSHIRE AREA UNITED RETRIEVER CLUB – CHARITY GUNDOG WORKING TEST
The Lincolnshire Area of the United Retriever Club held a Charity Novice and Open Gundog Working test at Raithby, near Spilsby. The test raised money for the British Heart Foundation and was in memory of Jim Cochrane of Moulton Eaugate, Chairman of the Lincolnshire Area of the United Retriever Club for twelve of the last fourteen years and a well known and very successful local gundog trainer; and also Bryan Capps of Spalding and Ken Naylor of Moulton Seas End who all passed away as a result of heart problems. Between them, they had a wealth of knowledge about training and working gundogs and willingly passed this on to anyone who was keen to learn more about the sport.

It was a wonderful day with forty dogs competing and there were five challenging exercises to test the dogs and their handlers. After the working part of the day, the competitors, their families and friends enjoyed a sumptuous barbecue, an enormous raffle and an auction of many and various lots including a photo shoot, hampers, a thumbstick, decorated cakes and some very nice wine.

What a day! £1254 was raised on the day. £500 matched funding was added by the Lloyds Banking Group through sponsoring the current club Chairman, Katie Capps of Spalding. As a result the Lincolnshire Area committee were able to present a cheque for £1754 to the British Heart Foundation! The committee thank everyone who came, who helped, who made donations, who gave prizes and lots, who made the day so enjoyable and successful. It was a fitting tribute to Jim, Bryan and Ken.

NEWS FOR DOGS
The Lincolnshire Gundog Society celebrates its twenty-fifth anniversary later this year and is still recruiting so here are a few details to pass on to your owners.

The Lincolnshire Dundog Society was formed in November 1986 from the Gundog branch of the Humber Wildfowlers. The aims of the Society are:
* To encourage the novice handler
* To conceive the best type of working dog.
* To promote field trials
* To promote working qualities in the dogs by holding training classes and working tests.

It is a busy organisation but offers a warm welcome to new members, especially in this anniversary year. Find out more at www.lincsgundogs.co.uk.

TOP TIPS
One of the biggest differences between those who win championships and those who don’t is the ability to stay focused. How do you do that when you are clay pigeon shooting for instance? Here’s a tip:

If you want to make sure you hit the target, whether clay or live, you must train yourself to keep focused and avoid distractions, especially mental distractions. Many suggest that you give your mind something to do that is tied in with what you are doing. If you are clay pigeon shooting for instance, try to read the the manufacturer’s name which is usually part of the clay’s mould. Try to read the name as the clay flies through the air. You must be joking! No really. It doesn’t matter if you can’t read it. Just try and that will keep your attention focused on the target. What if it is a live target? The same thing applies except that you need to try and see the colour of its eyes or beak. A straight target is a little easier because you have the bull to stare at. This might seem like a crazy tip but it really does work – as long as you remember that you aren’t just testing your sights but shooting as well.