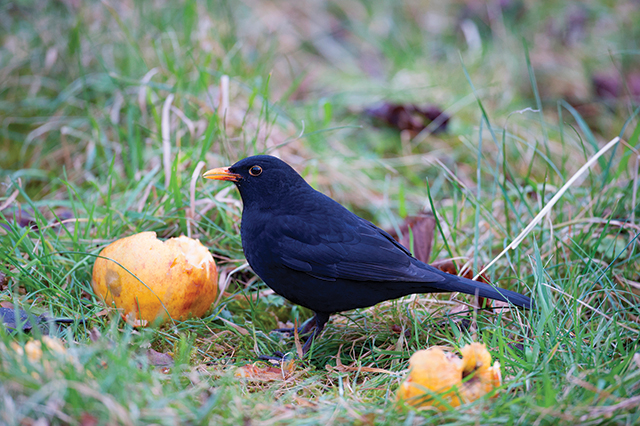 IN THE FIELD
March is the month when just about everything that has lain dormant for the winter comes back to life. By now many early spring flowers will be in full bloom, though like many of you I suppose, I had snowdrops and daffodils in flower at Christmas such was the mild weather.

Early mornings are awash with birdsong as the dawn chorus gets better and better. All our garden and woodland birds proclaim their territories and try to attract a mate. During the months of January and February there have been two big bird counts taking place, one of garden birds undertaken by the British Trust for Ornithology (BTO) with the assistance of the RSPB, and the other of farmland birds by the Game and Wildlife Conservation Trust (GWCT).

Thousands of people up and down the land have assisted on a set day and at a set time to count and record every bird they see. This helps us better understand the rise and fall in numbers of certain species. These counts give our government and conservation departments important information on how our wild birds are managing in an increasingly changing world – whether in terms of climate change or changes made by man.

Last year’s count raised some interesting points. While some species are increasing, others are in decline, some at an alarming rate. With so many people volunteering to take part every year, certain trends start to emerge. Over the period of the survey there have been some big changes, with song thrushes at an all-time low in 2015. There are annual fluctuations too; in the same year twice as many people saw wrens in their garden compared to the year before, when numbers were down after the cold spring and poor breeding season the year before.

Greenfinches were once a common bird in all our gardens but have suffered a 50% drop in numbers attributed almost exclusively to a parasite called trichomonas gallinae that was occasionally seen in pigeons; it has also affected chaffinches but not to the same extent. Sadly it is transmitted from bird to bird via communal feeding points, most notably garden feeders and drinkers.

Some of our prettiest finches such as the bullfinch and goldfinch seem luckily to be unaffected and numbers are on the increase, though still down by 35% compared to 1967. The hardest time for seed eating birds are the months from February through to April, often described as ‘the hungry gap’. This is when wild birds need help the most, with many turning up in our gardens to take advantage of our feeders. Shoot managers and gamekeepers have long known that keeping gamebird feed stations going until May benefits all birds, not just pheasants.

By now many birds will be nesting, most notable are the rooks who are renowned for getting an early start and laying the first eggs in February. Another early starter is one that has a bit of a love-hate relationship with us: the magpie. The magpie population has exploded in recent years with groups seen into the twenties at times.

I can remember as a child in the 1950s spotting a magpie was a rare occurrence and adding an egg to your collection was a prize indeed. They usually build their nests about ten feet off the ground in a tree or thorn bush; it is constructed of twigs and lined with dead grass. It is quite unique in the fact that it puts a roof over the top, not to keep the rain off but to protect the eggs and young from other avian predators – a bit ironic really, as he is himself an habitual taker of other birds’ eggs and young. The magpie is also very at home in the urban environment with some of the largest densities being found in our towns and cities, not least being due to the easy pickings to be found around our fast food outlets. He is an opportunist and quickly adapts to any new food source.

Finally, with the days lengthening and winter behind us, our farmers can get on with spring cultivations. They will be sowing barley, peas and beans as well as root crops like sugar beet and potatoes.

This is a busy time for the avid pigeon shooter who will be taking advantage of every chance to get out with the decoys. Shooting pigeons this way is very effective in building a bag as well as giving us a chance to put our field craft into action. Choosing the location as well as building our hide along with setting out our decoys correctly is paramount if we are to outwit the wily woodpigeon. Sometimes we don’t get it quite right, but that’s what makes us keep coming back for more. Happy shooting.

HARE COURSING WARNING SIGNS ISSUED TO LINCS FARMERS BY CLA, NFU AND POLICE
Signs warning hare coursers that they face prosecution and heavy fines have been distributed across Lincolnshire as part of a continued crackdown on the crime. The signs also urge the public to call 999 immediately if they see coursing taking place – helping the county’s Police to tackle the problem. Farmers and landowners can obtain the new hare coursing signs by calling either the CLA East office on 01638 590429 or the NFU regional office on 01572 824250.

COINCIDENCE…
Following last month’s topic of Ed Newton’s gun making, producing a new wave of Elite Makers, two John Mantons arrived on my desk; one a flintlock the other percussion.

John, the less famous brother, was already perfecting that ‘old faithful’, the Flintlock, which had been around for 200 years in various forms.

Wet days were anathema. He produced the waterproof pan – note the shape. Also see the roller to speed up ignition. John was also possibly the first to use platinum instead of gold for the touch holes which gave better durability.

He was born in 1752 at Spittlegate, Grantham, possibly foreman for E Newton and certainly for JF Twigg of Piccadilly (the very famous pistol maker) before setting up on his own at 6 Dover Street. He certainly learned to make Double Guns from Twigg. The arrival almost by default of the percussion gun changed all.

Reverend Forsyth had invented the percussion system after he had noticed how the flash of the flintlock startled any quarry and he came up with the cap which was placed on the nipple fixed into the barrel.

English makers had trailed behind their continental cousins for years in quality. John and his brother Joseph started the change and spawned great makers. Intern W Greener was a journeyman under John Manton along with his brother Joseph initially before he too set up on his own. Purdey too served under Forsyth.

John Manton was never as prolific an inventor as his brother Joseph but certainly he stayed in business. Ultimately a branch was opened in Calcutta. Joseph sadly went bankrupt more than once. They remain great Lincolnshire icons whose guns live on.