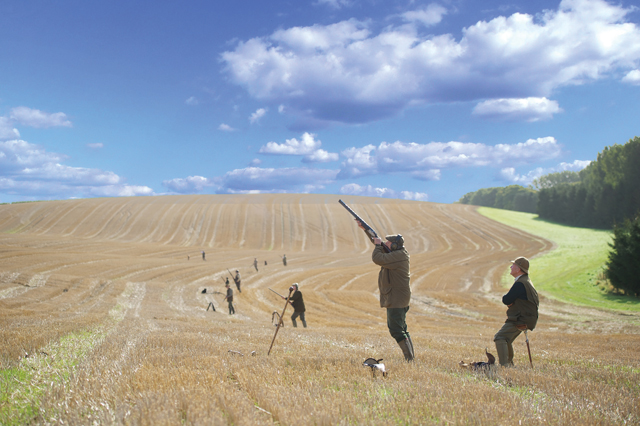 The Gunroom provides the best platform for all shooting pursuits – send us your news on editorial@lincolnshirelife.co.uk
Both winter rape and winter wheat are in the ground and growing, but as the days get shorter and the temperature falls the growing process slows right down to a point where the crop will be almost dormant for three months. The winter brings many changes to our countryside and our wildlife.

Our winter visitors such as swallows and house martins have already departed south to Africa, as has the turtle dove. At the same time many other birds are heading our way, coming mainly from Iceland, Scandinavia and northern Russia where the winters are hard and food supplies scarce.

We can expect to see fieldfares, as well as thousands of migrating geese that will be heading for the east coast around the Wash. Species including brent, pinkfoot, grey-lag and white-fronted, all will spend the winter on the marshes with many travelling inland to feed at dawn and dusk. In the main this causes no problem to the farmer as light grazing of some crops actually increases growth.

Listen out for the bugle call of geese on the move, often in ragged lines high in the sky, but frequently in skeins moving from one feeding area to another. Their call is so emotive and tells me that winter is here. We will also be seeing an influx of woodcock – this is known as a ‘fall’. Flying at night they will mainly arrive during the first full moon in November, crossing the North Sea having spent the summer as far away as Russia and the Baltic states. They can often be found in the morning lying exhausted on our eastern shores and beaches, particularly if it has been a stormy night. They soon recover and move on to spend the winter all over the UK and Ireland.

Those of you who run your own shoots will now be starting to reap the rewards of your hard work during the summer. With birds fully grown and the leaves starting to come off the trees, the best of the sport is just beginning, but of course it’s not just those carrying a gun that will be out enjoying themselves on a shoot day.

A shoot day may involve many people including keepers, beaters, gundog handlers – known as ‘pickers up’ – and possibly loaders if it is a bit bigger day. Those of you who read my column regularly will know that I am a keen shot, but I also rarely miss a chance to go beating when the opportunity arises; it gives me a bit of well-needed exercise and is great fun in the company of likeminded people.

Just recently I have been loading for a few days on a large estate not far away. This entails both double gun and what we call ‘stuffing’ – this is popping cartridges into the breach of an open gun for the shooter as he shoots. Double gunning is where the shooter will use a pair of guns with the loader reloading and handing him a loaded gun, and taking the empty one. This is usually associated with bigger days but is frequently used when overseas guests like to sample the best of British sporting traditions, and that includes the use of a loader.

At eleven o’clock on Remembrance Day, like many of you, I will take a moment to reflect the sacrifices made by all our armed forces in conflicts past and present. For many of us in Bomber County it is the Second World War that will be foremost in our minds and in particular the RAF. In the years 1939–1945, Lincolnshire was at the centre of Britain’s air power and thirty-two squadrons of nearly 800 Lancaster Bombers were stationed at forty-six airbases in our county. So many young men flew out of our county never to return, having paid the ultimate price for the freedoms that we all enjoy today.

When I left school in 1965 I worked on a local farm where a Lancaster had crashed in one of the fields and it was not uncommon to find bits of debris when ploughing. Only recently did I find out the circumstances of that crash. On a warm summer’s evening in August 1944, Lancaster LM 292 based at Elsham Wolds was crippled by flak on its way back from a raid over France. With an engine on fire and very nearly home, the pilot George Brown ordered his crew to bail out. His co-pilot stayed with him to try and land the plane. Seconds later the aircraft plunged into the ground, killing them both. All that remains is a shallow depression in the ground and a memorial on the village green. I will be thinking of them.

This very pretty gun, No 2 of a pair, was made for the Nawab of Bahawalpur. He ruled from February 1866 to February 1899. He maintained good relations with Britain throughout the Afghan War and was made Knight Grand Commander in recognition.

Like many of his peers, the Nawab had grand tastes coupled with the wealth to indulge them. La Maison Christofle supplied his amazingly ornate bed formed out of almost one third of a ton of chased silver. At each corner stood a life-sized automaton of a naked woman, spring mounted and powered by a musical box sited beneath the mattress. His term of governance was considered a good and just one, and unsurprisingly his Holland made £4500 – of the bed and No 1 gun I have no more information.

Closer to home, the pair of 1760 flintlock 40 bore pistols I have mentioned before – that were bought for £1 on Grantham market – got away for £400, interestingly not receiving a bid in June’s sale went well in September. We now have a large following who buy flintlock and percussion pistols. They make fascinating conversation pieces and are often of very high quality. Also from Grantham a 20 bore boxlock ejector by Alfred Field of London (in business for one year only) with very pretty Damascus barrels by Charles Lancaster – a very short stock meant this rarity made £600. Simon Grantham