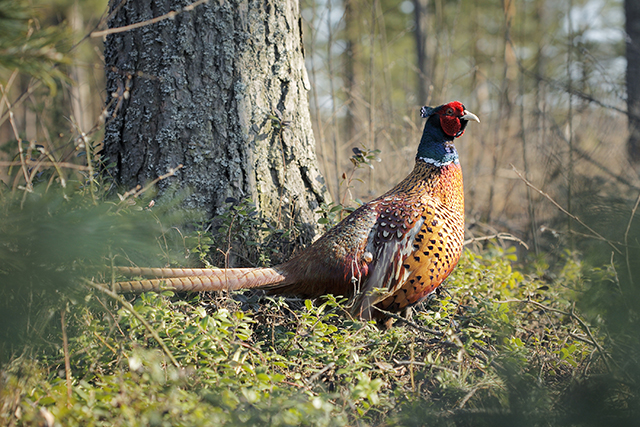 There was a good entry of twenty-six dogs for our Novice Cold Game Working Test, held at Caythorpe by kind permission of Richard Ward and Tony Wright. Our thanks to them; to Martin Eveleigh (who, as well as being chief steward, generously provided dog food sponsorship); to dog steward Theresa Jonsen and, of course, to our judges for the day who were Robert Daws, Casper Jonsen and Cherry Wood.

The bright, breezy weather was perfect for this test which was walked-up in sugar beet, with two marks for each dog in the first round and crossing retrieves in the second round. Twelve dogs were taken through to the afternoon, when they were tested on a mark in front and hares put out as blinds behind. By this time the wind had got up and, if the dogs drifted downwind, the handlers found it difficult to pull them back upwind to pick. This left six dogs for a drive and then they were taken to a peg twenty-five yards from a hedge. The dogs had to push through the hedge and go back another forty yards into the sugar beet field to one of two markers. The handler had been told from which marker, left or right, the dog was to pick one of the hares and pheasants that had been put out as blinds. Four of the dogs completed this test but the remaining two unfortunately picked from the wrong marker.

As always, we thank everyone, especially those who provided game, who helped to make this a successful test.

IN THE FIELD
With summer fast receding and the darker nights closing in, those of us who shoot can now really start to embrace the autumn and the coming winter. For those who do not engage in country sports the winter months are perhaps the least pleasurable time of the year, but for the shooting enthusiast it is a time of great anticipation and excitement, as the shooting season unfolds and shoot days that have been pencilled in the diary for months finally become a reality.

Guns will have been cleaned, shoes will have been polished and winter clothing made ready. For a lucky few the season has already started with perhaps an early day or two on grouse or partridge shoots, but for the majority of us October heralds the start of the shooting season proper, with pheasants now on the menu. Not only does wild game provide us with a wonderful opportunity to get out in the fields with a gun but it also allows us to put a bird on the table. If you have never tried game, now is the time to try wild meat at its best – it is completely free range, totally organic, virtually fat free and the only air miles involved were when it flew over the gun.

My shooting pal George and I are still shooting pigeons, as crop protection goes on year round, and just recently quite a few young birds of the year have been featuring in the bag. Nothing tickles my tastebuds like young birds cooked in a red wine sauce with a little oil and simply served with rice and potatoes. Such a feast was on offer when George put on a pigeon supper for my wife and me recently.

One of the advantages of rural living is that much of our food and ingredients can often be close by and it is fitting that the pigeons we were eating were shot over oilseed rape on a farm that produces its own brand of rapeseed oil; so the pigeons were shot as we protected the crop that produced the oil that the birds were cooked in. I suppose we could call it ‘Full circle cooking’. If you know someone who shoots, don’t be afraid to ask if they might have a brace of birds to spare, ‘oven ready of course’. I would never refuse such a request and, who knows, you might make new friends.

Security in an issue we can all too easily become complacent about, particularly in a rural setting. This was brought home to me recently when a shooting friend and his wife came home from a weekend away to find their home ransacked and their possessions strewn over the floor. In their absence, thieves had broken in and gone through everything, taking a safe with cash and jewellery inside and forcing his gun safe off the wall – with guns inside – and carrying it away. Such is the mental trauma to them both that they do not feel safe there anymore and have put their house on the market. Sadly, criminals care little for their victims.

Please check that your basic security is up to scratch, particularly doors and windows, including sheds and garages. Simple things like security lighting that detects movement is cheap and easy to install but might just make the difference. Nothing will stop the determined thief but the harder we make it for him the more chance he will give your property a miss.

Foraging seems to be a buzzword at the moment and in recent weeks many of you may have been out and about gathering everything from elderflower to nettles for wine; blackberries and wild cherries for pies; or just some of the many herbs that abound in our woods and fields. For me, at present, it has to be sloe – the fruit of the blackthorn – used to make sloe gin. This is a favourite tipple after the second drive on a shoot day. Commercial brands are available from the supermarket but nothing beats the bottle you make yourself. The only problem is making enough, as by shoot day half of it has gone – funny that.

The long, hot summer has clearly done us all no end of good including our wildlife. My friend Gerald, whom I mentioned last month, phoned me to say he had seen a family of twenty-four wild English partridges and asked was this a record. It is not uncommon for separate clutches of chicks to merge into one big covey, but either way it just goes to show how resilient our wildlife can be, after the constant rain that took such a toll last year. It has been suggested that we shoot no English partridges this season. I don’t necessarily agree, as local populations can vary. All I will say is that if you feel that you have a ‘shootable’ surplus then take a few but be conservative; we cannot afford to lose this iconic little bird.

It’s not too late to let me know about your shoot. If you’re proud of it and would like a mention in the magazine, let me know.

FINE MODERN AND ANTIQUE GUNS
St Etienne
An 11mm needle-fire, bolt-action, single-shot service rifle, model ‘chassepot M1866’, serial number 8945, circa 1867, with 32½-inch sighted barrel. The octagonal breech section is marked ‘manufacture Imperiale St Etienne’ and ‘MLE 1866’. This model has a right-angled bolt (non-matching number), plain, straight-hand, hard-wood, three-quarter stock with iron furniture (woodwork lightly bruised and scuffed). An iron full-length clearing rod is stored under the barrel; the whole with iron parts darkly stained, together with an ‘M74 GRAS’ bayonet dated for 1878, with matching scabbard but misnumbered to rifle. Results of auction in November 2013 issue of Lincolnshire Life Magazine.
Anyone wishing for a free valuation or to consign can call me on 07860 300055. Simon Grantham

The F Class World Championships held at Whittington Ctr NRA ranges in Raton, New Mexico are the official World Championships held by ICFRA (International Confederation of Full Bore Rifle Associations). ICFRA is a confederation of independent autonomous national fullbore rifle associations and is the only worldwide body for the promotion of fullbore rifle shooting. Its aims are set out in the Constitution and include the standardisation of fullbore rifle shooting rules and the promotion and control of international matches at world level.

Steve came 11th in the UK National League and was selected for Team GB two years ago. He explained: ”Over the last two years I have had to prove myself for final selection on not only my shooting abilities but also being able to work as a team, fitness levels, personality, appearance etc. These qualities are analysed by team captains and coaches for announcement of the final team selection. Last November I was selected as a member of the squad to represent Team GB at the World Championships. Although, two extra shooters were selected and two would be dropped from the squad. I suppose this really kept us on our toes as no one knew who would be de-selected from the squad.”