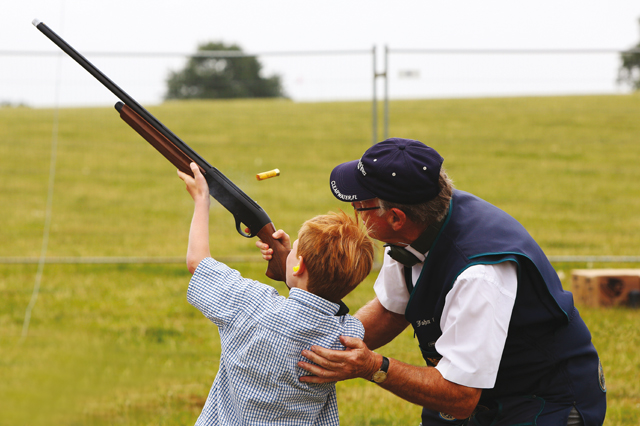 The Gunroom provides the best platform for all shooting pursuits – Send us your news on editorial@lincolnshirelife.co.uk
CLA GAME FAIR’S SUNNY RETURN TO RAGLEY
Learning to handle a gun efficiently and safely is crucial for youngsters as they begin to take up country sports. Hundreds – like the young boy pictured – had the opportunity to experience just what is involved at this year’s CLA Game Fair, where expert tuition was on hand throughout the three days.

Keeping to its roots while remaining entirely relevant to current issues and concerns is a format which underlies the success of the event, as the 129,000 visitors who attended this year’s CLA Game Fair at Ragley Hall, Warwickshire will testify.

While a full range of country activities including archery, shooting and fishing were on offer, a ‘Tweetup’ initiated by keepersmate.co.uk, a website for gamekeepers, beaters and guns reflected the way the countryside is far from being locked in the past. Organiser, Ben White said: “I decided to arrange this because it’s a great way for lots of people who are friendly on Twitter, who speak every day and are interested in field sports, to meet up and put a face to a tweet.

Food and fashion played their part: the Totally Food Show, a celebration of local food, included demonstrations to help cooks bring food from wood and field to plate, while each day Heart FM scouted the grounds for those who had made that little extra effort with their attire. Each day’s winner and a guest won the chance to enjoy all the action in the main arena from the VIP luxury of the Rolls-Royce Country Club.

But, of course, country sport was the main activity, with the ever-popular gundogs competing in the CLA Gundog of the Year and budding and experienced anglers alike hoping for a £10,000 cash prize in a new feature, Fish for a Fortune, where all who caught a fish were entered into a draw.

IN THE FIELD
With the temperature nudging 27C on the opening day, we arrived at the CLA Game Fair held at Ragley Hall in Warwickshire – when I say ‘we’, I mean myself and my dear lady wife who once a year likes to share the annual pilgrimage with me. By taking her with me it saves having to explain why I need certain pieces of shooting equipment, as she is usually too busy selecting a few choice items for herself to pay much attention to my requirements.

By 9am we were in and, after a cup of tea, we joined the throng of eager visitors already filling the aisle. Before long, however, bumping into old friends and spending time looking at various goods and demonstrations was starting to take its toll and we were not alone in constantly trying to find a bit of shade and a cool drink as the temperature crept ever nearer to 30C.

With so much to see, one day does not do it justice, but we took in as much as we could. The highlight for me was watching multiple champion John Bidwell giving his shooting exhibition. I have watched him many times but am still amazed at his skill in shooting everything from clays to potatoes, balloons and even eggs; all from the hip and sometimes with the gun upside down, pulling the trigger with his thumb. We ended the day enjoying a few drinks with friends at the Shooting Times Magazine stand. Tired and weary, we finally made it home at 10:30pm. It was a long day but worth every minute.

IS YOUR SHOOT SPECIAL?
With the game shooting season upon us, many of you will be busy on your own shoots, with birds to care for and shoot days to plan. I know that for many of you it is a labour of love and you are proud of your efforts and so we would like to recognise those efforts and showcase one shoot each month, during the season starting in October.

If you think your shoot is special and would like to be recognised, drop me a line at Lincolnshire Life, County House, 9 Checkpoint Court, Sadler Road LN6 3PW or email editorial@lincolnshirelife.co.uk telling me a little bit about your shoot and why you think it should be featured. It can be a big shoot or a little one, commercial or private – or just a few friends mucking in together for a few days of sport – write and tell me about it. I will then contact you and together we can discuss it, I look forward to hearing from you.

PIGEONS
With the harvest now well underway, my friend and I are getting out onto the stubbles and shooting some useful bags of pigeons. After the cold days of winter, it is good to be able to drive right to our chosen spot without the need to carry anything. With plenty of cover and wearing short sleeves, this is pigeon control at its best and if you have not tried it you are missing a wonderful aspect of shooting.

FROM WHERE I’M STANDING
Both the RSPCA and the RSPB are in the news again. The RSPCA reportedly has access to the police database and can get personal information on individuals including addresses, driving histories, or information about firearm certificates. It is worrying, since the RSPCA is not a government department and those working on its behalf could all too easily pass information to other groups, who might be a little less charitable in their methods of getting their message across. The police are trying to play it down but I would like to know who sanctioned it.

In the opening week of the grouse shooting season the RSPB released a press report on the decline of the Hen Harrier. Blaming moorland gamekeepers, they failed to mention that only twenty per cent of our moors are managed for grouse shooting and that breeding success on unmanaged moors including RSPB reserves was no better. According to the GWCT (Game and Wildlife Conservation Trust) a wet and cold spring was the main factor in poor breeding success.

The last sale at Holt’s produced a serious one-off: the side-opener – this one made by Mr G Jeffries of Norwich, Lot 1812. The gun is of the hammer variety – hammers were the thing, through flintlock with finally percussion cap, then cartridge based systems developing around 1865. Mr Purdey’s self-opening sidelock was just around the corner, though still a non-ejector.

1860-1890 was a time of extraordinary innovation, kickstarted to a certain extent by Prince Albert with his sporting pedigree and The Great Exhibition of 1851. Our burgeoning colonies were ably supported by the British gun trade.

Close to home, in Walcot, a Churchill Premier XXV in its case was produced for valuation. Robert Churchill was a short, busy, enigmatic character – a showman, good businessman and great shot. He inherited a business from Edwin Churchill, his father, which needed help. His answer, the 25” barrelled XXV. Nitro powders followed black powder; combustion time was instant; there was no need for those cumbersome long barrels to ensure the black ignited. This lightweight gun is beautifully made, and uses Baker’s self-opening system; but short barrels, while great for grouse and partridges, are not ideal for tall pheasants and they are now out of fashion. Lincolnshire is full of them, I can think of twenty among acquaintances – perhaps now is the time to buy!