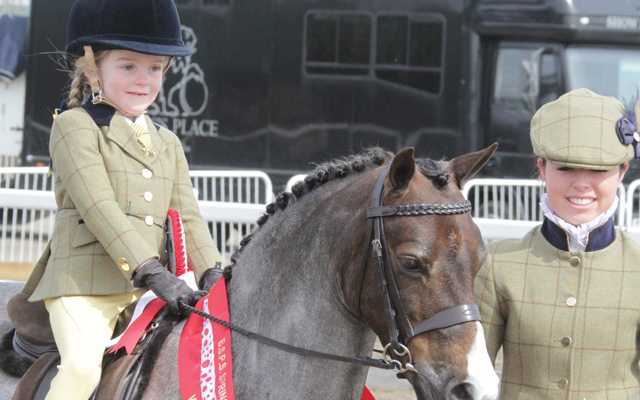 BSPS Area 4b covers a large area – from the Humber in the north all the way down to Peterborough in the south.
Despite this, it is small in terms of numbers and prides itself on being friendly and inclusive and welcomes riders and ponies at all levels.

Throughout the year, those who choose to can compete in qualifying competitions for the Horse of the Year show (HOYS) which is held in October each year at the NEC Birmingham.

Daniella Johnson and Freya Cade both did particularly well in winning their classes. Daniella won the 143cm Mountain & Moorland Working Hunter with Knockadalteen Fox and Freya won the 128cm Show Pony with Sandbank Early Bird and was Reserve Champion. For Freya this was a wonderful end to the most amazing season which included winning four HOYS qualifiers and being the overall points winner in her section. This was even more special since it was her last year in 128cm classes and she will now move on to 138cm classes with her new pony Whiteleaze Diplomat.

Another rider competing with her pony for the last time was Isabel White, who had an unlucky pole down to finish fifth in the 133cm Working Hunter with Seaford Top Cat. She will now move on to 143cm classes with her novice pony Cre Dhubh Boy.

Amy Bosworth (25) was competing in her final HOYS in junior ranks as she moves on to seniors next year to compete in Riding Horse and Hack classes. She was placed fifth and sixth respectively with her two young horses Landmark Maisie and Llanarth Fair Play.

The two youngest members from this area, Ellie Ellingworth (7) and James Read (9) were also well placed. Ellie almost missed out on competing altogether, as a fall the previous week left her arm in a sling. Despite this she came fifth in the Lead Rein of hunter type with Peplow Dancing Queen. Her sister Georgie will take over this ride next year as Ellie moves on to her M&M Lead Rein pony.

Although still eligible for Lead Rein classes, James was competing off the lead at HOYS for the first time. He coped very well with the electric atmosphere and was beautifully looked after by his new ride Fofsway Dominic to finish a creditable tenth place in the First Ridden Show Pony.

The committee would like to congratulate all 4b members on a fantastic year of achievement at all levels. If anyone would like further information about BSPS area 4b or is interested in becoming a member please see the website – www.bspsarea4b.co.uk

Please remember that you do not need to become a member in order to attend training or non qualifying competitions.