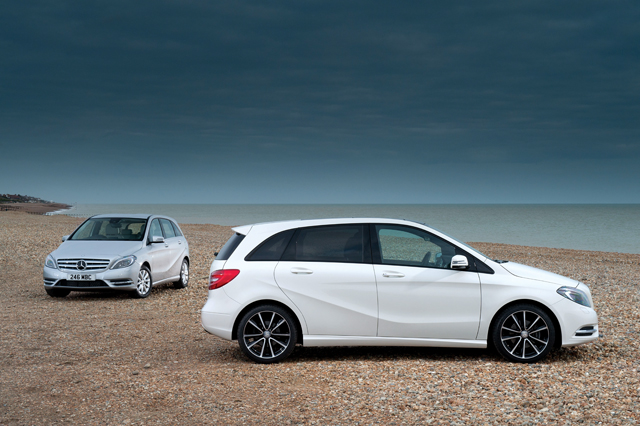 Things are changing in the world of motoring. Premium brand car manufacturers are offering smaller models – take the Audi A1 and the BMW 1 Series for example.
Of course, Mercedes-Benz was ahead of many. After all, it introduced the entry-level A-Class supermini in 1997. Then in 2005 the B-Class, essentially an enlarged A-Class, was ushered in. Why? Well, sometimes you just need a luxury car that sits more towards medium than mini. And that’s what the B-Class is all about.

But time doesn’t stand still, and Mercedes felt a change of direction was needed for the B-Class. The German motor maker has made the car more agile and efficient by lowering its height. Also, as is the case with the 200 CDI on test here, a new diesel engine has been fitted alongside a more modern manual transmission.

So, what’s the revised B-Class like? Well, it’s a typical Mercedes sports tourer, offering bags of room, combined with the dynamic performance of a hatchback saloon. The character lines of the exterior point to both of these qualities: the front and rear demonstrate width-emphasising design, with a prominent grille and headlamps extending along the sides at the front, while the rear end has a broad rear window, two-piece tail lights and a big tailgate with low loading sill. The fresh, athletic lines and the aerodynamics are particularly apparent in the side line: the bonnet flows flawlessly into the A-pillar and the roof line descends neatly to the attractive roof spoiler. At the bottom edge the body includes side skirts which add a soft touch to the car’s form, whilst sophisticated details, such as the deftly designed headlamps, confirm the marque’s distinctive first-rate credentials.

Naturally, and as you would expect from a quality European car producer, the B-Class is as nice on the inside as it is on the outside. High-quality materials and finely structured surfaces abound. Three air vents in the middle of the dash, with their unique cruciform nozzles, add a particularly sporty element to the interior’s design. Other touches such as a three-spoke, leather trimmed steering wheel and seats with contrasting stitching are very pleasing to the eye.

On the move the B 200 CDI BlueEFFICIENCY Sport is incredibly nimble. You’d think that would make it pleasurable on twisty rural routes. Well it does in a way, but it doesn’t make for comfortable driving. You see, in ‘Sport’ guise the car’s suspension is far too harsh and, because it also sits on 18-inch alloys, it crashes and bangs over the slightest change of road surface. Mind you, if you don’t mind having your fillings rattled out of your molars then the car is great fun to throw around corners. It’s also fantastic for motorway mile munching. That’s when the car magically decides to ignore any road imperfections and comfort levels return to what you might expect from Mercedes-Benz.

As well as being a lively, safe, family oriented number, the B 200 CDI never forgets it comes from pedigree stock. It offers internet access, voice control, sat-nav and MP3 connectivity. Traditionally these executive features were the reserve of luxurious Euro-barges; now you can indulge yourself without having to fork out for one. Oh, and there’s one other advantage of driving a B-Class: it’s so much easier to park compared with a more extravagant motor. Let’s face it, once you’ve battled the morning rush hour, and the only parking bay left is the awkward one in the corner, you’re going to be thanking yourself you didn’t think bigger was better when you walked into that Mercedes-Benz showroom. Price: £24,710 on the road