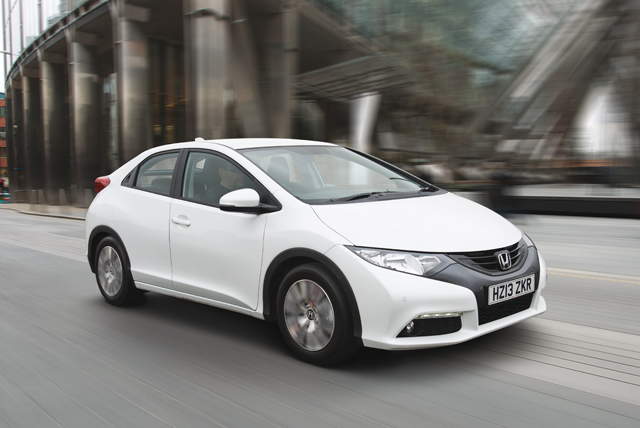 With the exception of the high performance Type R model, the Honda Civic used to have a rather run-of-the-mill image. But the 2005 incarnation was radical and sexy enough to change that perception.
Now the car has gone ‘under the knife’ again to achieve an even tighter, sharper appearance. The result is an aesthetically pleasing, sporty motor that drives almost as brilliantly as it looks.

Inside, the fresh Civic has a more athletic cockpit layout, a redesigned small and chunky steering wheel, as well as cool, blue door lining illumination. The car’s lightweight six-speed manual gearbox is slicker than ever, and the gear ratios have been optimised to give higher speed refinement and a more satisfying action. In fact, Honda’s 2012 Civic has moved general driving pleasure up a whole notch. The steering is more direct, thanks to a retuned electric power steering system, and cornering is more precise because of stiffer suspension. This hasn’t affected comfort though. Far from it; the car has improved refinement and offers a good, stable ride – especially at motorway speeds.

Fuel economy is seriously impressive with the 1.6 diesel powered Civic. It returns an average of 78.5mpg and emits just 94g/km of CO2. For maximum efficiency you can choose to press the green ECON switch on the dashboard. This clever device ensures a very smooth increase in torque (turning power) for a more relaxing drive and less fuel consumption. But of course an engine is at its cleanest when it’s not running at all – that’s why idle stop technology is also fitted. Honda makes cash-saving driving fun too – the Civic’s speedometer illumination changes, depending on how hard your right foot is down, or how long you hang on to the gears. The lighting is blue when the car is idle and stays blue during sudden acceleration and deceleration. It turns to green if you drive it in an economical manner but, in between, blue-green lighting shows during gentle blips of the throttle.

The Civic is generally aimed at the family market so, as you would imagine, space is no issue – especially with Honda’s ‘Magic Seat’ system. Flip up, fold down or recline – you can transform the cabin at the lift of a lever or the push of a button. For example, the rear seats can be folded down completely to give a flat load space which is large enough to carry three mountain bikes, three large cases or three big golf bags. This is possible even with the front seats in their rearmost position.

In SE trim the Civic is a very pleasurable place to be ensconced – particularly if, like me, you spend long periods on the road. Equipment includes electric windows and mirrors, as well as climate control.

The up-to-the-minute Civic is indeed a top motor. Made by a company with a legendary reputation for bullet-proof reliability and comfort, the hatchback, although not the quickest in its class, is one of the best looking. And, on top of that, the car is built in Britain alongside its popular siblings, the CR-V and Jazz. You’ll just have to find nearly £20,000 to pay for it – or wait for the new Civic to come on to the used market.