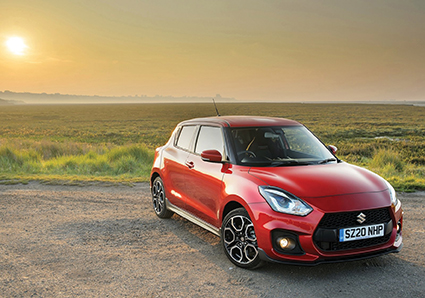 It’s small, it’s sweet, yet it’s a speedy motor. That just about sums up Suzuki’s Swift Sport Hybrid.
It looks almost naughty from the back with its cheeky twin tailpipes – and with five aboard the car appears suitably hunkered down. Hang on, did I say five? Yes, that’s right – I got the whole family into this Japanese supermini. That involves “her indoors” and me in the front – and the three nippers in the back. Well, they’re not all tiny anymore – so it surprised me that two fairly grown youngsters could fit alongside their smaller sibling in her child seat.

Was it a squeeze? Hell, yes – but we did it! And the car still didn’t lack power. That “Sport” moniker doesn’t lie – the Swift in this guise does zero to 62mph in just over nine seconds, and its maximum speed is 130mph. What’s more, we went on a long trip to the wilds of Lincolnshire – and the 50mpg we got on our 100-mile round trip impressed us. Emissions are only 127g/km CO2, too.

So, what’s all the hybrid stuff about, then? Well, I won’t bore you with the details; all you need to know is that a bunch of tech, including a 48V battery and an electric motor, assists the car’s 1.4-litre Boosterjet turbo engine. The new powertrain helps improve fuel consumption by six per cent, but it also enhances driving feel by adding more pulling power to the party.

Behind the wheel, you get a real sense of fun sat in the Sport’s bucket-like seats. The Swift’s bodyshell is so light that you can chuck the car into bends and zip along straights like you stole it. On top of that, the six-speed manual gearbox tears through the gears like a mad thing. I swear down, the car’s 0-62mph sprint genuinely feels quicker than the figures on paper state.

The supermini is noticeably quieter than it used to be as well – possibly due to a roof spoiler that helps to reduce wind resistance, but also because of the decent materials in the cabin that help muffle unwanted sounds. The Suzuki’s safe, too – due to six airbags, blind-spot monitoring, and traffic sign recognition.

So, the Swift Sport Hybrid is a bit of devil really – on the one hand, from the front, it looks “butter wouldn’t melt” innocent. On the other hand, the little five-door hatch’s raunchy rear is a tell-tale sign that it’s at a similar level to some hot-hatches. For £21,570 you get a lot – for a little car.